Any hopes in Downing Street that Dominic Cummings’ TV appearance would draw a line under his Durham trip have been dashed if today’s front pages are anything to go by.

“No regrets” features prominently on several, with the Daily Mail and the Daily Mirror using the same phrases, but in reverse order. “No apology, no regrets” says the Mail, about Cummings’ “rose garden roasting”, referring to his TV appearance in No 10’s garden. “Boris’s defiant svengali refuses to quit” the Mail says over his trip to Durham, and asks: “So how CAN he survive?” 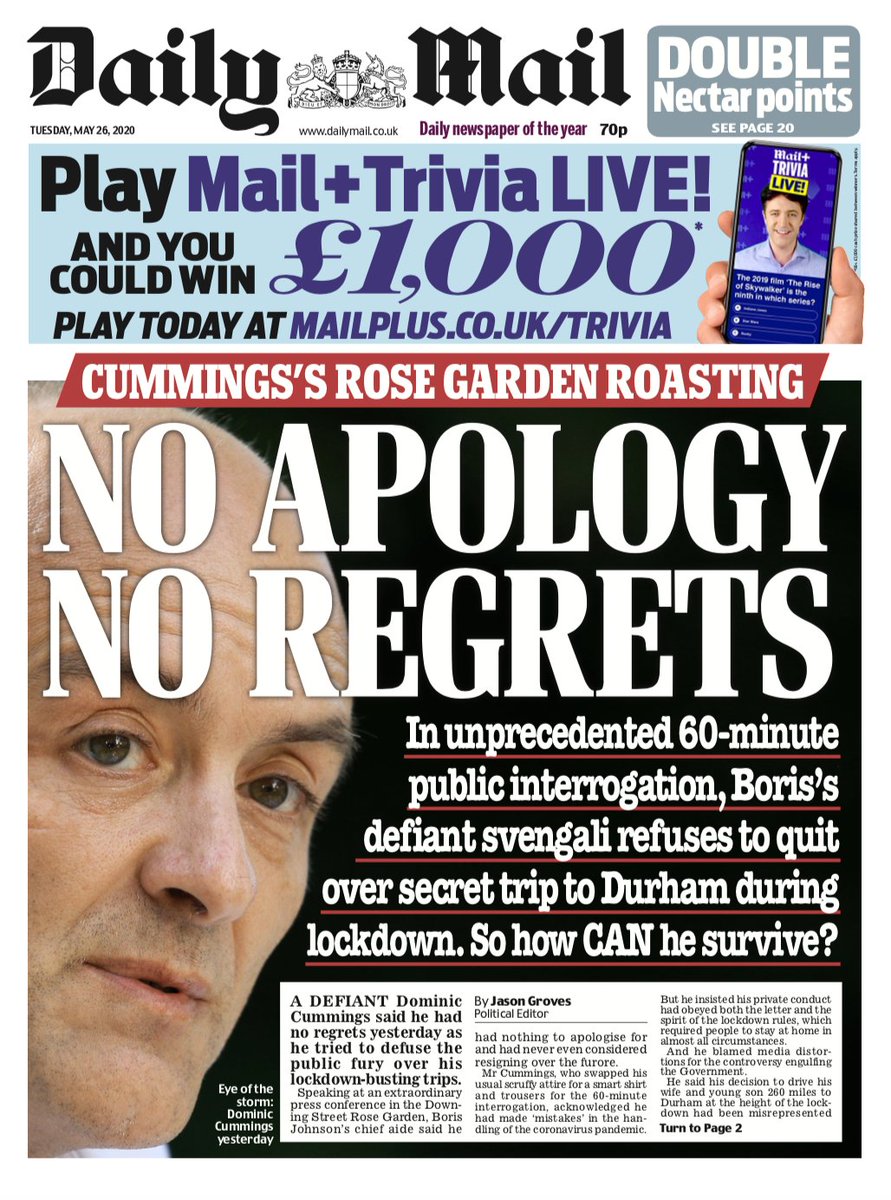 “‘I don’t regret what I did’: Cummings refuses to quit,” is the Guardian’s headline, describing his TV appearance as “extraordinary”. His justification for driving to Durham to self-isolate was so complex, writes the Guardian’s political editor, Heather Stewart, “it might have helped if he had had a whiteboard to sketch it out on”. 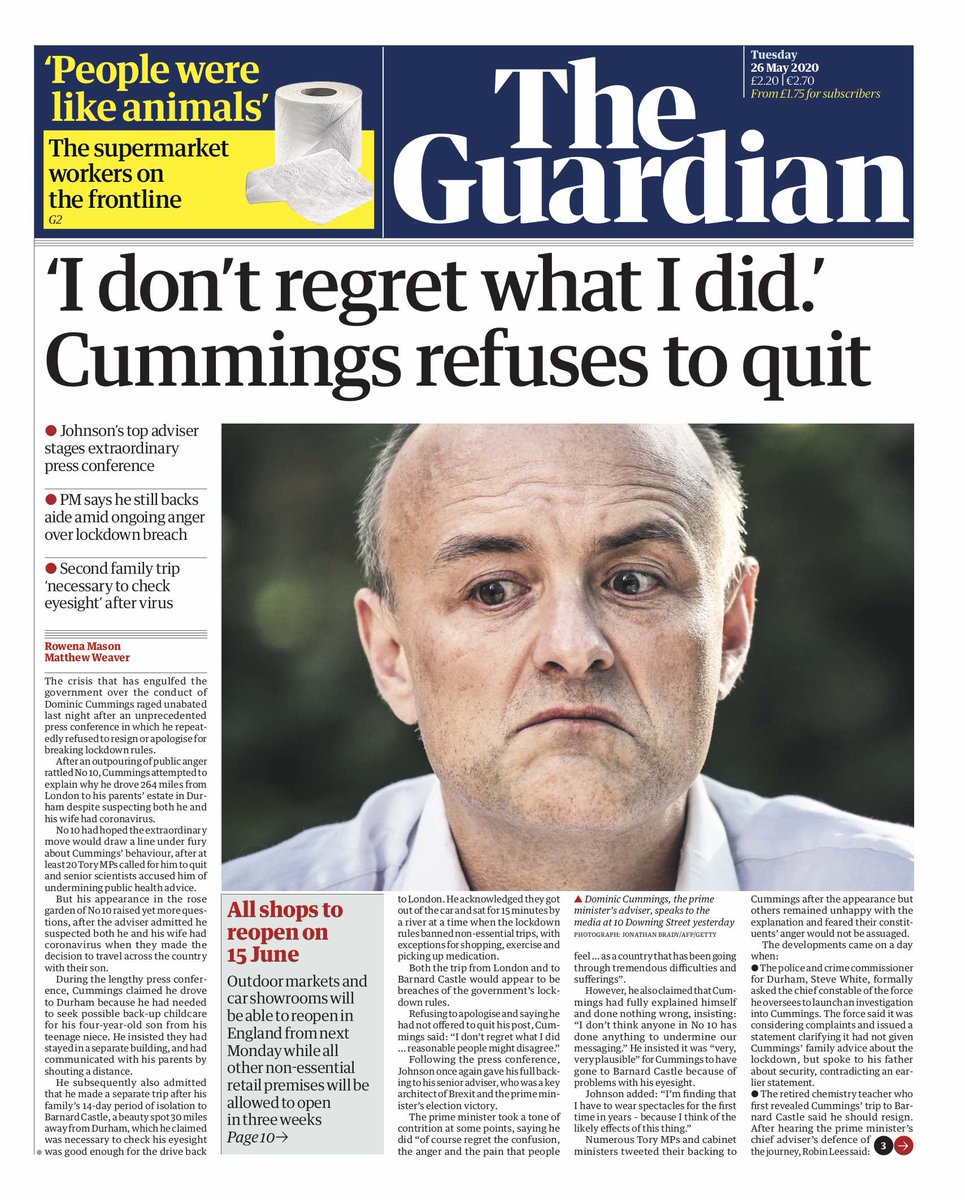 Guardian front page, 26 May 2020: ‘I don’t regret what I did.’ Cummings refuses to quit pic.twitter.com/yUpjvwTUxO

The Mirror, whose joint investigation with the Guardian broke the story, has “No regrets, no apology” as its main headline, describing Cummings as “shameless”. The paper lists nine “killer questions” it wants him to answer after his press conference – including why he returned to No 10 when he suspected his wife had Covid-19, contrary to official advice. 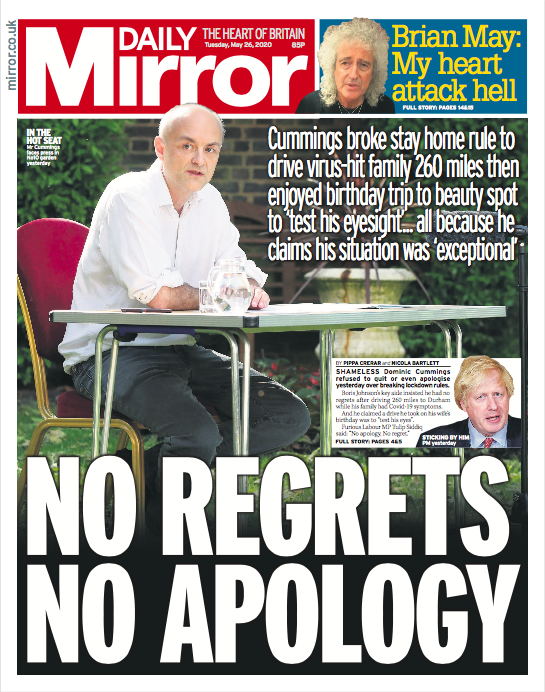 The Times splashes with “Cummings: I did not break lockdown rules”, adding he believed he behaved “reasonably and legally”. The paper acknowledges Cummings’ account “raised several questions about his behaviour that he did not address”.

It says Downing Street has tried to “orchestrate a show of support” for the PM’s aide, but some senior ministers are angry: “My jaw continues to drop. He’s saying he’s so much more important than us plebs,” it anonymously quotes one as saying. 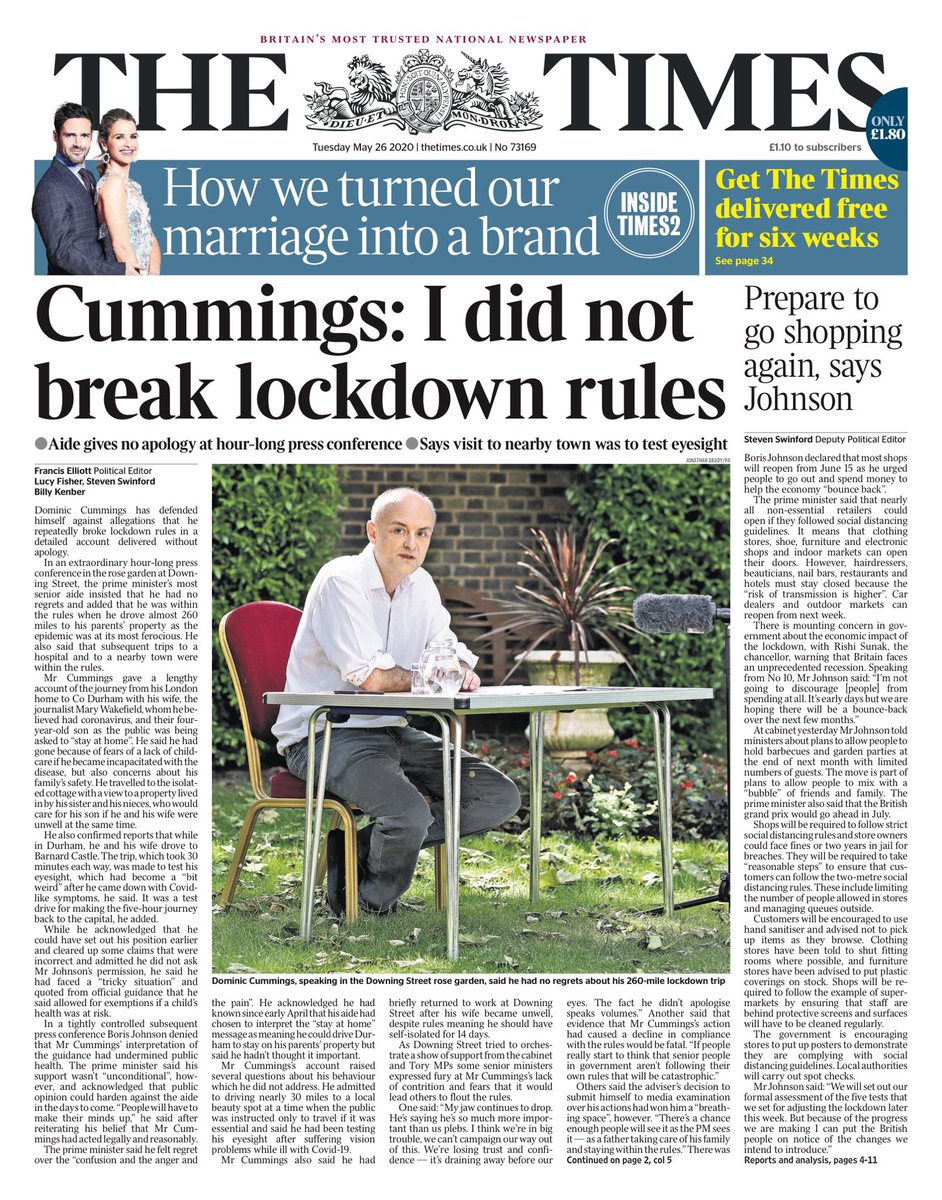 Tuesday’s The Times: Cummings: I did not break lockdown rules #TomorrowsPapersToday pic.twitter.com/cph7Odpr5X

The Telegraph runs a large picture of Cummings, but a very small headline: “I don’t regret what I did”. It saves its splash for “High street to reopen as UK edges back to normality”. It quotes from Cummings’ interview: “I believe I made the right judgment but I can understand that others may disagree with that,” adding that he knew British people “hate the idea of unfairness”. 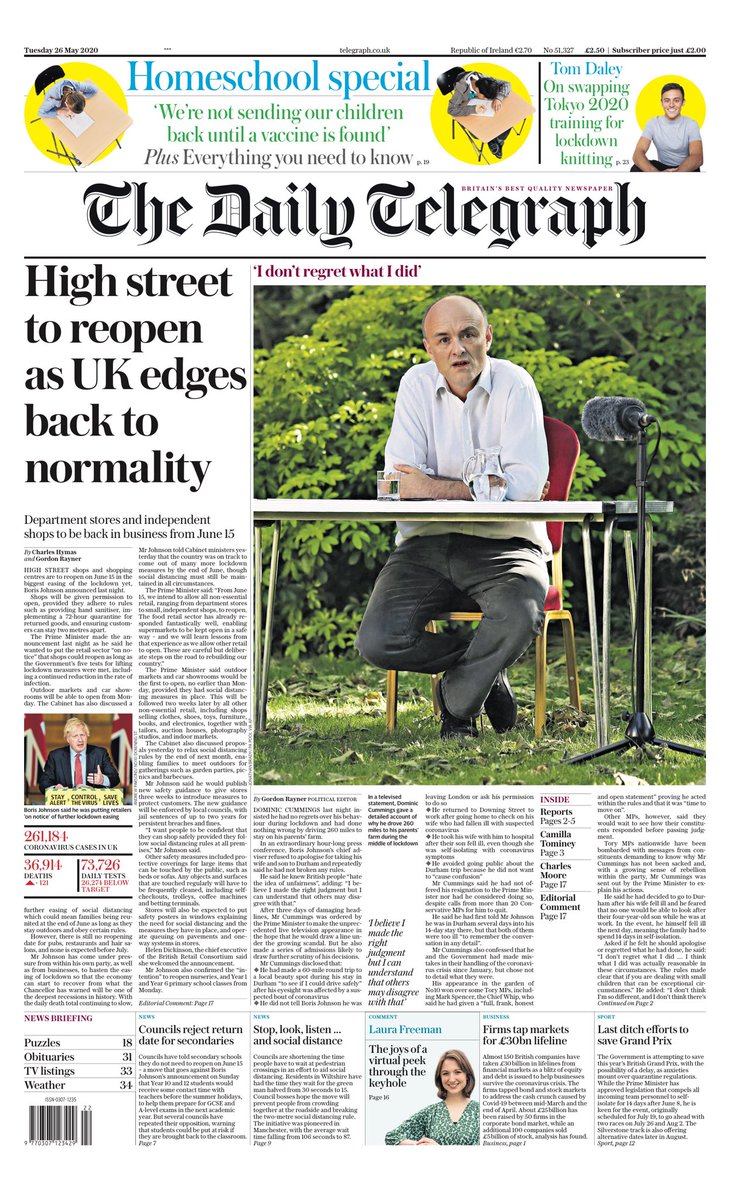 The Sun also reserves its main story for “Open for business’”, and allots Cummings the top right hand corner with the headline: “Cummings out fighting: I did what was right for my family and my country”.

The Express also leads on the hope of businesses reopening (“Hurrah! Shops to open doors soon”), with a single headline for Cummings: “I’ve no regrets: Cummings faces down his critics”. 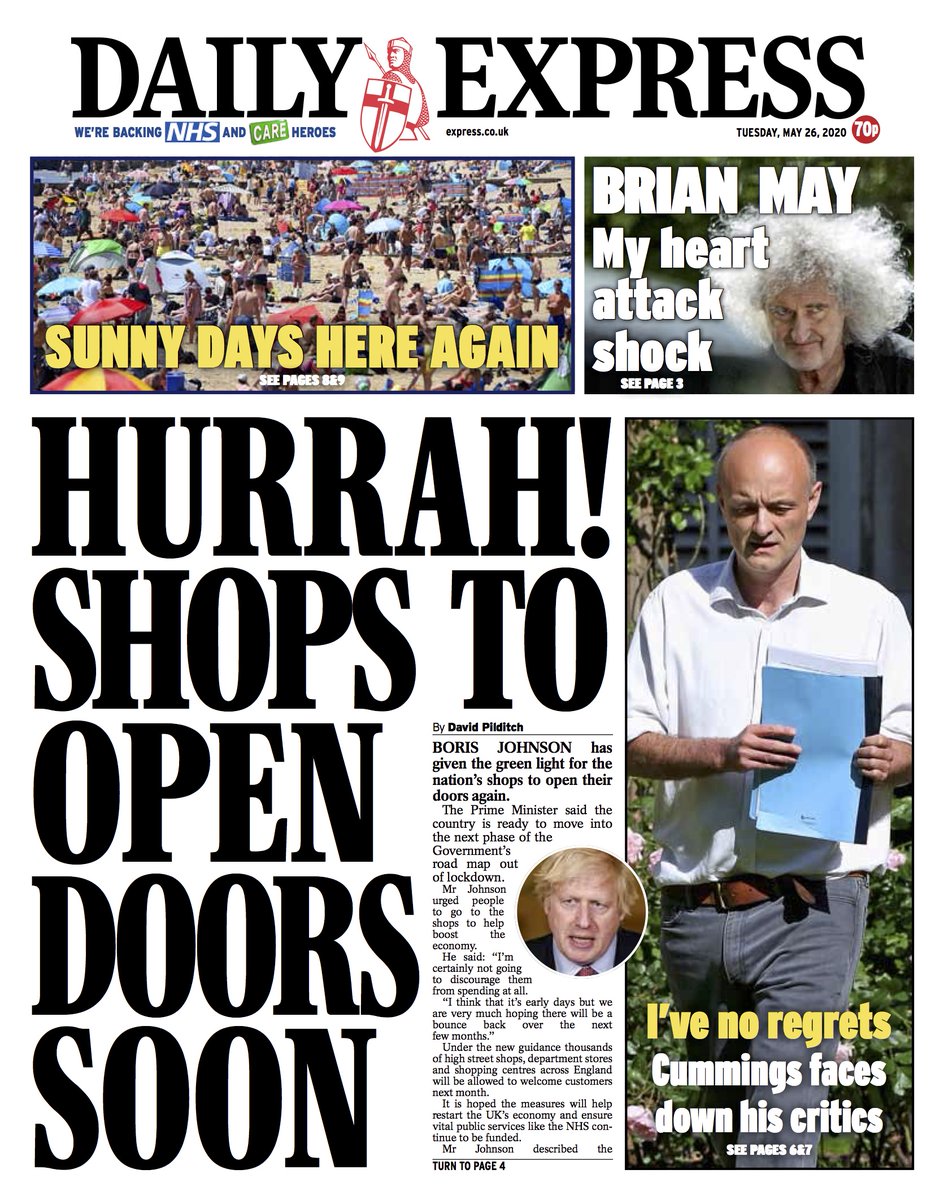 The FT carries a picture of Cummings, but its headline is about the PM: “In the open: Johnson sorry for public’s anger after Cummings defends trips”. 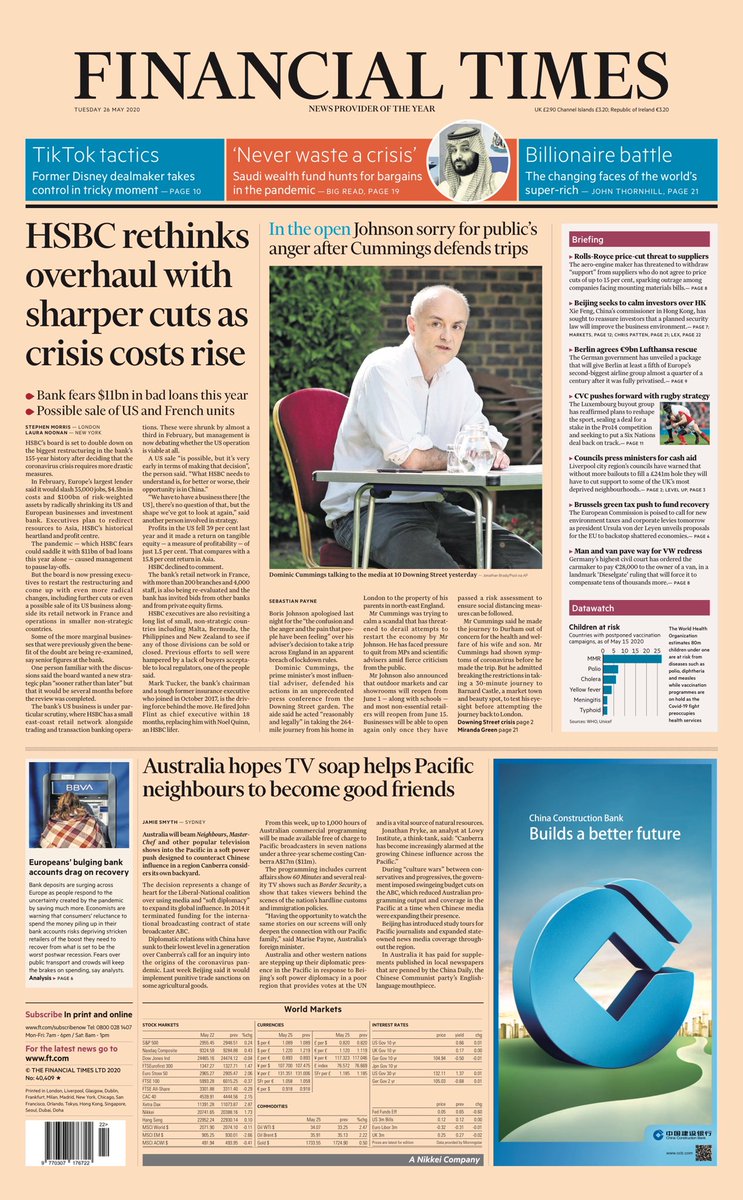 Metro considers the inequity of it all and riffs off Boris Johnson’s “stay alert” messaging with the headline: “Stay elite”. 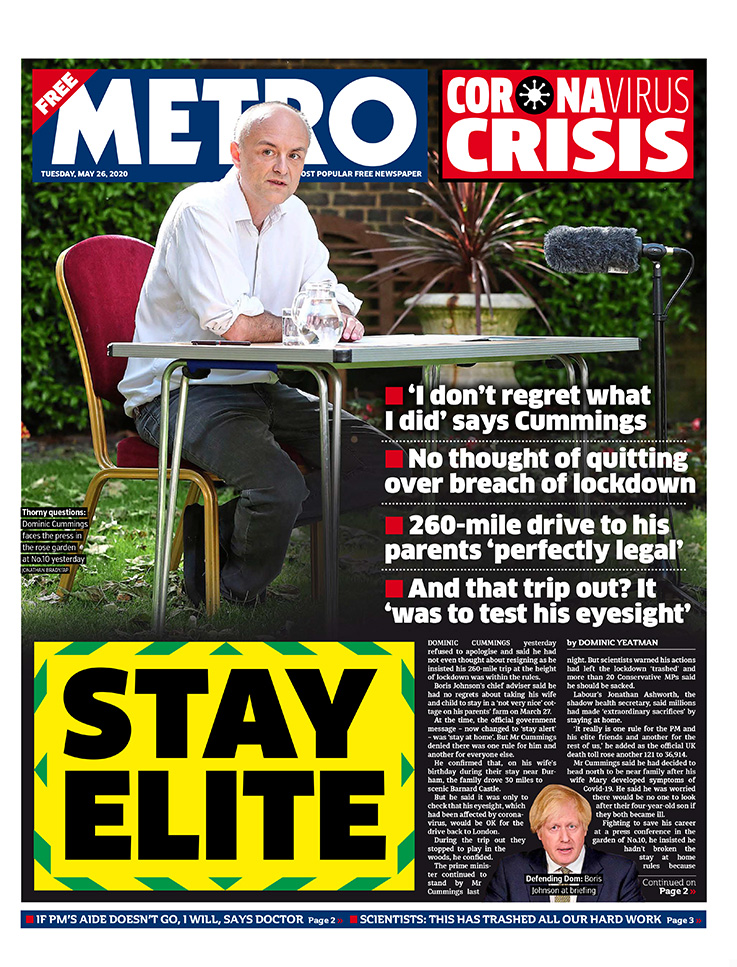