Astronomers have detected a giant ‘blinking’ star towards the centre of our galaxy, more than 25,000 light years away.

The star, VVV-WIT-08, was observed using the VISTA (Visible and Infrared Survey Telescope for Astronomy) in Chile.

The scientists say it decreased in brightness by a factor of 30, or by 97 per cent – meaning it nearly completely disappeared from the sky – before returning to normal.

Many stars change in brightness because they pulsate or are eclipsed by another star in a binary system (a solar system where a pair of stars orbit each other).

However, the researchers say it’s ‘exceptionally rare’ for a star to become fainter over a period of several months and get brighter again.

Artist’s impression of VVV-WIT-08. An international team of astronomers observed VVV-WIT-08 decreasing in brightness by a factor of 30, so that it nearly disappeared from the sky. While many stars change in brightness because they pulsate or are eclipsed by another star in a binary system, it’s exceptionally rare for a star to become fainter over a period of several months and then brighten again

VVV-WIT-08 may belong to a new class of ‘blinking giant’ binary star system, where a giant star 100 times larger than the Sun is eclipsed once every few decades by an as-yet unseen orbital companion.

Potentially, the companion, which may be another star or a planet, is surrounded by an opaque disc, which covers the giant star, causing it to disappear and reappear in the sky.

‘Basically the star was getting dimmer and dimmer. And at the dimmest point it was 30 times less bright than in the beginning,’ study author Dr Sergey Koposov from the University of Edinburgh told MailOnline. 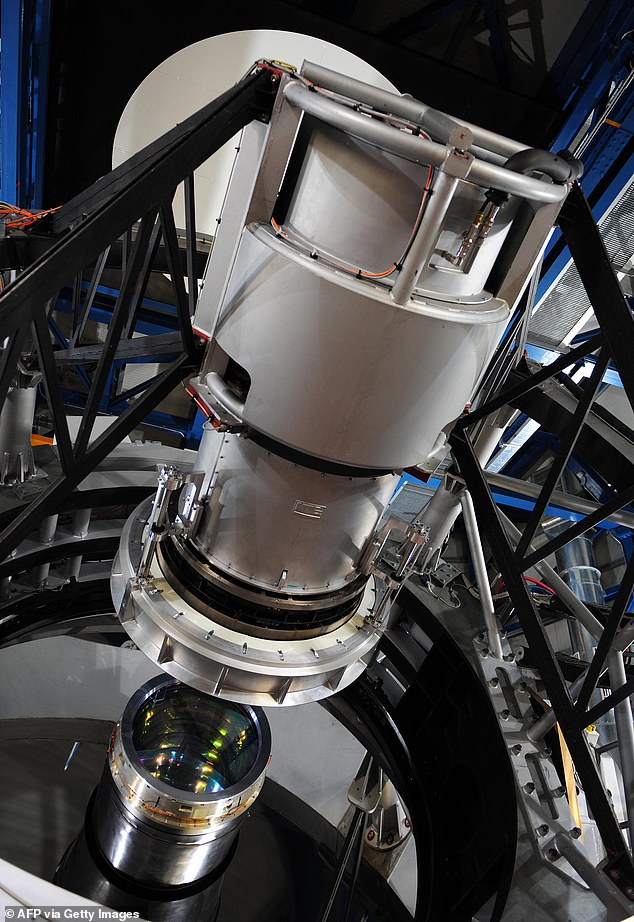 Our Solar System is in the Milky Way galaxy.

But our Sun is just one of about 200 billion stars in the Milky Way.

And astronomers have discovered more than 3,200 other stars with planets orbiting them in the Milky Way.

The Milky Way is also just one of billions of galaxies in the universe.

‘Imagine that you have solar eclipse, but in such a way we can only less than one 30th of the Sun’s disk.

‘Another analogy – imagine having a light-bulb that you move 6 times further away that will also give you 30 times decrease in brightness.

‘It’s amazing that we just observed a dark, large and elongated object pass between us and the distant star and we can only speculate what its origin is.’

VVV-WIT-08 was found by the VISTA Variables in the Via Lactea survey (VVV), a project using the British-built VISTA telescope in Chile and operated by the European Southern Observatory.

VISTA has been observing the same one billion stars for nearly a decade to search for examples with varying brightness in the infrared part of the spectrum.

‘Occasionally we find variable stars that don’t fit into any established category, which we call “what-is-this?”, or WIT objects,’ said project co-leader Professor Philip Lucas from the University of Hertfordshire.

‘We really don’t know how these blinking giants came to be. It’s exciting to see such discoveries from VVV after so many years planning and gathering the data.’

The researchers say VVV-WIT-08 reached its dimmest in April 2012 and the total event duration was a few hundred days.

Nearly a decade later, the team are reporting their findings in a new paper, published in the journal Monthly Notices of the Royal Astronomical Society.