Typical Trudeau charm! Beaming Carrie Johnson seems to be getting on famously with Canadian Prime Minister after bumping elbows at the G7 in Cornwall

By Monica Greep For Mailonline

Carrie Johnson was left beaming today after she bumped elbows with Justin Trudeau as she and Boris formally greeted G7 leaders in Cornwall.

The Canadian Prime Minister has become the unlikely political crush of women everywhere since being elected  – and it seems not even Carrie is immune to his charms.

She was seen today sharing a friendly moment with Trudeau today as the newlyweds welcomed guests to the official start of the summit one by one on a beachfront board walk on Carbis Bay.

As Trudeau approached he put on a face mask before bumping elbows with Boris and turning his attention to Carrie to say: ‘It’s lovely to meet you Carrie’. 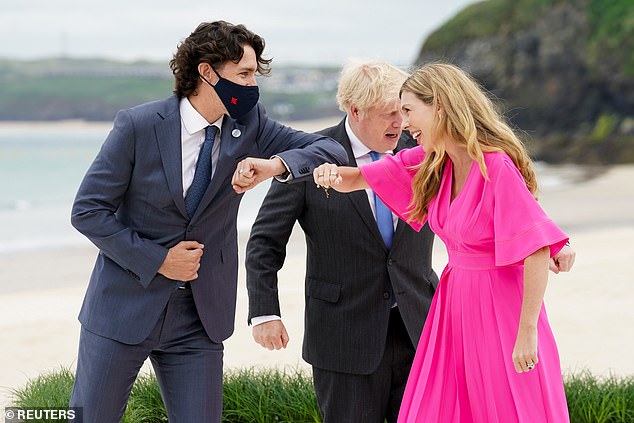 Boris then shared some brief words with the pair, who were seen sharing having a short conversation and laughing before posing for a photograph.

The 33-year-old opted for a vibrant pink Roksanda gown, initially costing £1,395, which she hired from rental website Hurr.

Boris was last seen publicly with Trudeau when the pair met ahead of the last G7 summit held in Biarritz, France, almost two years before he and Carrie tied the knot last month.

The pair wed in a ‘small ceremony’ at Westminster Cathedral this May after an extraordinary cloak-and-dagger operation to keep the event secret – with a bigger celebration planned for next summer.