The ‘Maker’ two-seater taxi is capable of travelling for 60 miles at 150mph across cities, the company’s CEO has said, with its commercial launch expected in 2024.

The unveiling comes as an increasing number of investors and aviation companies pile into the hot but yet-to-be-approved urban air mobility space, but the vehicle has not yet been shown in the air.

Interest in zero-emission aircraft that take off and land like helicopters but fly like planes is growing as aerospace companies look for new markets and face pressure to help decarbonize their industry though the battery-operated vehicles.

Archer’s aircraft does not yet fly commercially but it mounted an extravagant show under a new chief creative officer who has decades of experience in experiential design and television production, Kenny Taht, to attract attention.

Archer expects Maker’s commercial launch in 2024 in Los Angeles and Miami and is in the process of certifying the piloted four-passenger aircraft with the Federal Aviation Administration, co-founder and co-CEO Brett Adcock told Reuters.

‘Our real goal is to make a mass market transportation solution in and around cities,’ Adcock said.

In New York City for example, the 17-mile trip from John F. Kennedy International Airport to Manhattan would cost $50 to $70 and take around five to seven minutes versus 60 to 90 minutes in a car.

The vehicle has 12 electric motors powered by six independent battery packs, and the aircraft is 100 times quieter than a helicopter when its at altitude, generating just 45 decibels, Adcock has said. 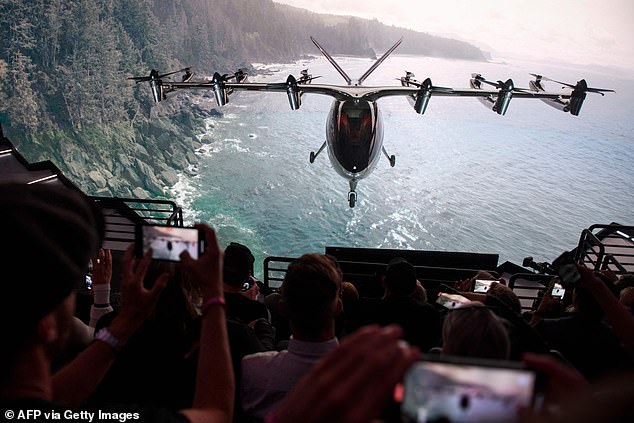 The Archer Maker is a full-scale electric vertical takeoff and landing aircraft (eVTOL), designed to be capable of traveling 60 miles at 150 mph to provide sustainable urban air mobility in cities. Pictured: The aircraft is unveiled d on June 10, 2021 in Hawthorne, California 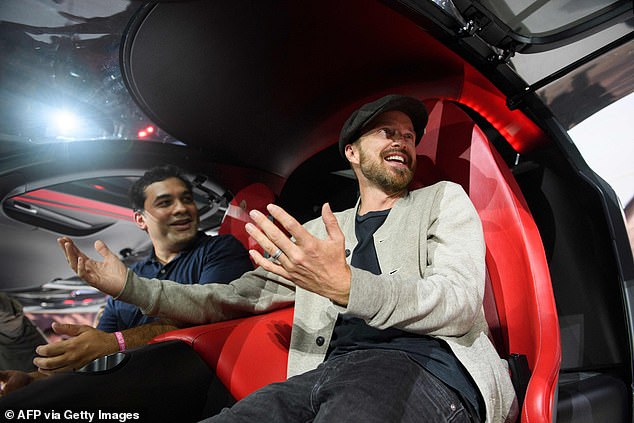 Interest in zero-emission aircraft that take off and land like helicopters but fly like planes is growing as aerospace companies look for new markets and face pressure to help decarbonize their industry though the battery-operated vehicles. Actor Aaron Paul (right) sits inside the Archer Aviation Maker on June 10, 2021 in Hawthorne, California