Antarctica’s 180 trillion ton Pine Island glacier could collapse within 20 years as the floating ice shelf helping to hold it back is ‘ripping apart’, a study has warned.

The Pine Island ice shelf — located on the West Antarctic Ice Sheet — has been known to have been thinning now for decades as a result of climate change.

However, analysis of satellite images undertaken by researchers led from the University of Washington has shown a more dramatic loss in recent years.

From 2017 to 2020, large icebergs at the edge of the ice shelf have broken off into the Amundsen Sea, resulting in an acceleration of the glacier further inland.

The Pine Island Glacier is already responsible for a quarter of Antarctica’s ice loss — and its complete loss could see sea levels rise by some 1.6 feet (0.5 metres).

‘We may not have the luxury of waiting for slow changes on Pine Island; things could actually go much quicker than expected,’ said lead author Ian Joughin, a glaciologist at the UW Applied Physics Laboratory.

‘The processes we’d been studying in this region were leading to an irreversible collapse, but at a fairly measured pace.’

‘Things could be much more abrupt if we lose the rest of that ice shelf.’

Broadly speaking, the thinning of the Pine Island ice shelf over the last few decades has been caused by the presence of warmer ocean currents which have melting the underside of the floating ice mass.

The recent changes, however, are being caused by a different process, Dr Joughin explained — one that is connected to the internal forces acting within the glacier.

‘The ice shelf appears to be ripping itself apart due to the glacier’s acceleration in the past decade or two,’ he added. 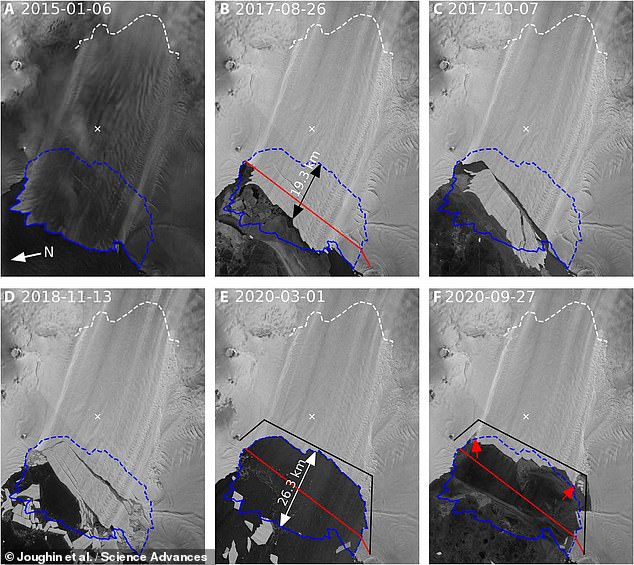 From 2017 to 2020, large icebergs at the edge of the ice shelf have broken off into the Amundsen Sea (as pictured in this time-lapse), resulting in an acceleration of the glacier inland

Between 2017 and 2020, the Pine Island ice shelf lost around a fifth of its area in series of dramatic breaks which were captured by the European Space Agency’s Copernicus Sentinel-1 satellites.

In their study, Dr Joughin and colleagues analysed images of the ice shelf taken between January 2015 and March 2020 — finding that the movement of two points on the glacier’s surface had sped up by 12 per cent between 2017–2020.

An ice flow model — developed at the University of Washington — confirmed that the loss of the ice shelf was responsive for the observed speedup.

‘The recent changes in speed are not due to melt-driven thinning — instead they’re due to the loss of the outer part of the ice shelf,’ Joughin said.

‘The glacier’s speedup is not catastrophic at this point. But if the rest of that ice shelf breaks up and goes away then this glacier could speed up quite a lot.’ 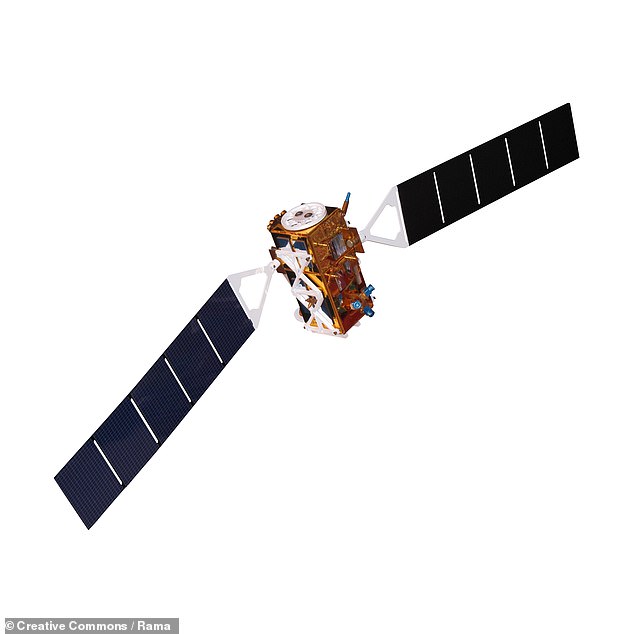 Between 2017 and 2020, the Pine Island ice shelf lost around a fifth of its area in series of dramatic breaks which were captured by the Sentinel-1 satellites (a model of which is pictured)