The Government spent more than £30,000 promoting the failed Pick For Britain scheme, MailOnline can reveal.

Farmers could not recruit the 60,000 British volunteers needed to save UK crops when the coronavirus pandemic stopped seasonal foreign workers from entering the country last year.

Yet £29,830 was spent between April 2020 and April 2021 on the failed scheme, the Department for Environment, Food and Rural Affairs (Defra) told MailOnline in a response to a Freedom of Information request.

The figure includes £1,424 paid to Concordia Ltd, a volunteering and international work placements charity, for a film of UK farm workers ‘used to create promotional recruitment materials for the Pick for Britain campaign’, the department’s response read.

Another £2,500 was then paid to the National Union of Students (NUS) so the Government could find out what went wrong after the scheme was scrapped in April 2021.

Farmers could not recruit the 60,000 British volunteers needed to save UK crops when the coronavirus pandemic stopped seasonal foreign workers from entering the country last year. Pictured, pickers Steliyana Cherneva (right) and Angel Vetsov select the first cherries of the season at AC Hulme and Sons Farm in Kent

It comes a year after one east of England asparagus farmer, who wanted to remain anonymous, told MailOnline he faced an ‘absolute nightmare’ because of the scheme.

He added: ‘The Government who think British people are going to work on the land are deluded. It’s not successful employing British workers. It’s not a success.’

Pick for Britain, brought in by the Government in April 2020, was scrapped after 12 months when Britons struggled with the workload required.

In April 2020, within minutes of Environment Secretary George Eustice’s call for Britons to sign up, Pick For Britain’s website crashed as thousands of people logged on.

But despite the heavy influx of applications, of the 70,000 picking and packing roles needed in 2020, fewer than 7,000 Britons actually took up jobs.

One frustrated applicant told Aljazeera he sent out 35 CVs to farms across the country which were advertising on a website called British Summer Fruits, but did not get a single response. 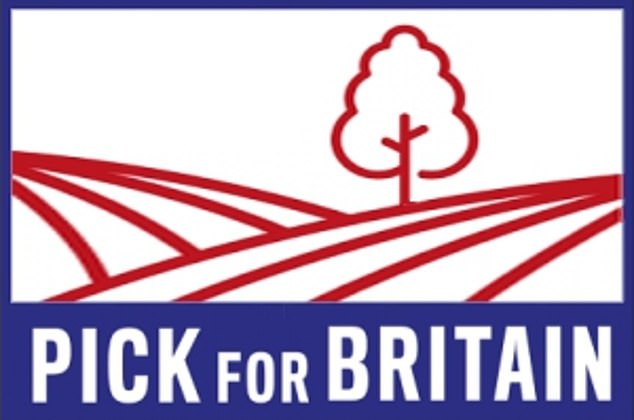 Despite the heavy influx of applications, of the 70,000 picking and packing roles needed in 2020, fewer than 7,000 Britons actually took up jobs (logo)

Jane Bull, from Poole in Dorset, also faced a steady steam of rejections.

She eventually decided the new Land Army was ‘a farce’ and chose to sew PPE (personal protective equipment) for NHS front-line workers instead.

‘There are false claims about people not taking up farming jobs. They’re blaming it on the British working people and it’s not our fault at all,’ she said.

But this was not the case according to Concordia, which found only 150 farm jobs were accepted by British workers in April 2020, despite the 50,000 expressions of interest.

The Alliance of Ethical Labour Providers also found, despite receiving 36,000 applications of interest, only 6,000 accepted interviews.

Adam Kelly, 30, from Surrey, found the mobile app recruitment Spark Hire ‘confusing’ and glitchy, and said it cost him a job.

The National Farmer’s Union found that once in a job, first time UK-based workers only stayed for an average of nine and a half weeks, compared to the 18 weeks returnee non-UK workers toiled for.

In May last year Ali Capper, the Horticulture and Potatoes Board Chairman for the National Farmers’ Union (NFU), revealed furloughed office workers might not be physically fit enough if they haven’t used the necessary muscles before.

She said: ‘These jobs are hard work. You have to be physically fit. For people used to an office or computer-based working life they will find they’re using muscles they haven’t used.’

John Colegrave, farmer at Wykham Park Farm in Banbury, said he employed 20 British workers to pick the fields at his farm, but only eight stayed because ‘it’s not everyone’s cup of tea’.

‘A lot didn’t know what the job involved before they started. We had five who came and lasted an hour and said ‘I don’t think this one is for me’ and five or six that we had to sort of let go.

‘They were willing but they were never going to keep up. We had a friendly discussion and they went elsewhere.’

The Pick for Britain website is no longer advertising farm work – and now has a notice on its homepage thanking growers, recruiters and retailers for taking part.