Man vs poncho! Hilarious moment a cricket fan captivates the crowd as he struggles to put on a yellow rain coat during England test match

By Clare Mccarthy For Mailonline

This is the hilarious moment a cricket fan struggled to put on a yellow rain poncho during a test match between England and New Zealand.

The man was captured on camera attempting to fix his bright-coloured rain coat to protect him from the rain at Lord’s Cricket Ground in London last Sunday.

The crowd watched as he was broadcast on the big screen as putting the rain jacket on the wrong way around, pulling his arms through the holes – only to find the hood covered his face.

He realised his mistake and quickly noticed he was being filmed as the whole crowd erupted in cheers and laughter.

The man, who was dressed in a smart tan suit with a yellow shirt and blue-tinted sunglasses, took the joke well as he threw his head back in a fit of laughter and waved to the camera.

He then proceeded to take off the poncho to begin a second attempt, putting it over his head the correct way round this time.

The cameras stayed fixed on him as he fumbled with the sleeves and the head hole, as the whole crowd watched captivated. 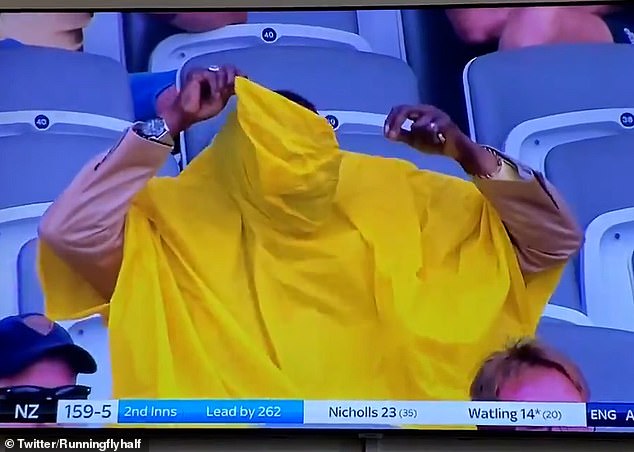 The man was captured on camera attempting to protect himself from the rain at Lord’s Cricket Ground in London on Sunday – only to find the hood covered his face!