CNN anchor Brian Stelter’s wife Jamie Shupak Stelter has been accused of bullying colleagues and creating a toxic work environment akin to a ‘den of vipers’ at her TV station New York 1.

NY1 insiders painted a damning portrait of Stelter, 37, in a bombshell New York Magazine report published this week about years of turmoil within the station.

The report describes how Stelter became a fan favorite when she joined NY1 in 2010 as a traffic reporter – prompting a New York Times profile entitled: ‘Stuck in Traffic? A Star is Born’.

But current and former colleagues of Stelter say the fame quickly went to her head as they watched her transform into a ‘diva’ and ‘high school bully’ who would gossip behind coworker’s backs.

Her alleged catty behavior only worsened as she gained more notoriety with a 2017 promotion to serve as co-anchor focused on traffic on NY1’s Mornings on 1, colleagues said.

The report came as Stelter’s CNN star husband Brian – dubbed ‘Hall Monitor’ by his critics – has faced his own career troubles as ratings on his show ‘Reliable Sources’ have plummeted after he was slammed for coming off as biased in a fawning interview with White House Press Secretary Jen Psaki. 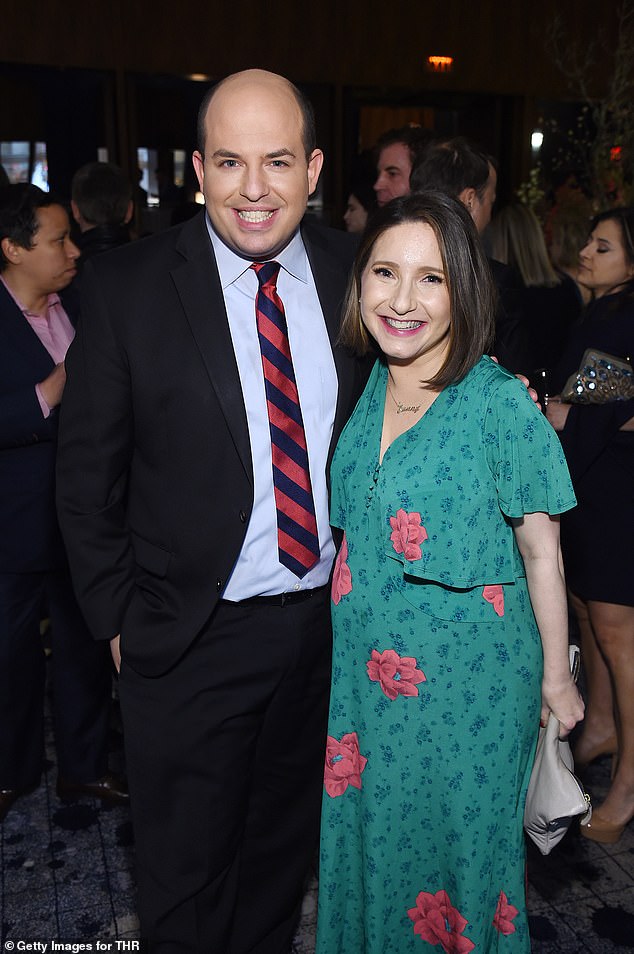 NY1 insiders painted a damning portrait of Stelter, 37, in a bombshell New York Magazine report published this week about years of turmoil within the station. Stelter and her husband Brian are pictured at an event in April 2019

But now it’s his wife, Jamie, who is in the spotlight for her alleged bad behavior.

Shortly after, a former staff member told the magazine, executives told Zwick she could no longer post photos of her NFL or pageant days.

Colleagues also said that after she became an anchor on Mornings on 1, she and co-anchor Annika Pergament would openly gossip about of their co-workers, sometimes while their mics were still on.

‘It could be the way someone did their hair, what they’re wearing, their reporting,’ one former source told the New Yorker, with another saying, ‘A lot of people don’t like working with Jamie,’ and a third former colleague reporting that ‘people would avoid her.’ 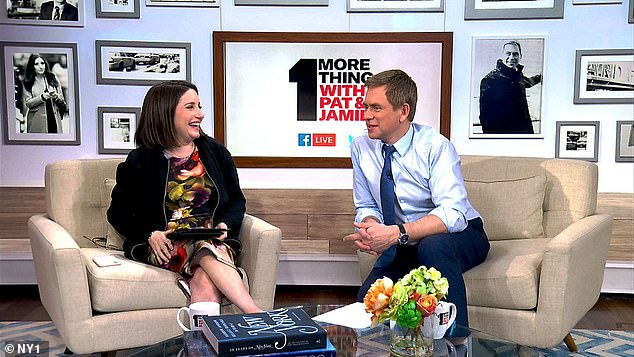 Stelter, left, is now a co-host on ‘Mornings on 1,’ alongside co-anchor Pat Kiernan 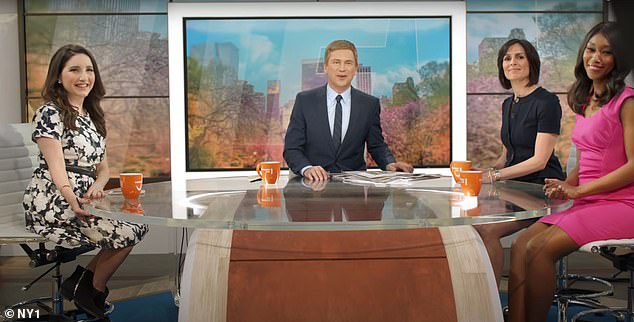 Insiders claim Stelter, right, and Annika Pergament, second from left, would talk disparagingly about meteorologist Stacy-Ann Gooden and would exclude her from roundtable discussions on the morning show

Ten current and former employees of the company reportedly told the magazine that Stelter and Pergament would talk disparagingly about Gooden, and she was often ostracized from the rest of the group  – excluded from meetings and left out of roundtable discussions on set.

When she was given the opportunity to speak, John Friia, a former producer, said ‘it was very short, abrupt.’

Then, in 2018, when Gooden, who is black interviewed New York City’s First Lady Chirlane McCray for a Black History Month segment ‘one of the questions Pat [Kiernan, another co-anchor of the morning show] and Jamie wanted Stacy-Ann was how Dante got his Afro so big.’ Kiernan and Stelter denied the claim to the New Yorker.

‘It  got to the point where Stacy-Ann couldn’t take it anymore because they were just outwardly rude,’ one former colleague said, with a former crew member saying Gooden tried to report the behavior to Human Resources, and when nothing changed, she quit.

‘She wouldn’t even let them counteroffer,’ the crew member said. 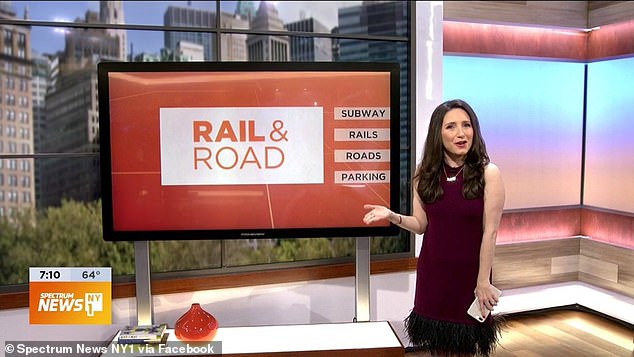 Stelter got her start as a traffic reporter for New York 1, and soon gained fame in her role

The allegations against her come just a few months after five longtime female anchors settled with the news channel’s parent company Charter Communications for alleged age and gender discrimination.

The women, ranging in age from 40 to 61, claimed they had been pushed aside in favor of younger, less experienced talent – women in their 20s and 30s, after Charter Communications took over operations in 2016.

The lawsuit alleged that Pat Kiernan, 52, made ‘significantly more money’ than Roma Torre, even though they had similar responsibilities.

As part of the settlement in December, the New Yorker reports, the five anchors had to leave the network.

Two other lawsuits against the company over alleged pregnancy discrimination are still pending, according to Meaww.com, as staffers say the company has become increasingly hostile since Charter Communications took over.

Reporters who worked under Melissa Rabinovich, who had overseen Queens and Staten Island coverage before being promoted to assistant news director, called her ‘the ultimate Regina George,’ a reference to Rachel McAdams’ character in ‘Mean Girls.’

Alanna Finn, a former news assistant said Rabinovich prevented her from getting a promotion by writing her up for unpaid parking tickets with the company car, although a Charter spokesperson told the New Yorker she did not submit her tickets to the company as required, which resulted in the fees.

One unnamed source allegedly said he threatened legal action against Charter after Rabinovich put a GPS in his company car and recorded his whereabouts, although Charter officials told the magazine they routinely do that for safety.

Another former reporter alleged that Rabinovich once called her from an event to ‘tear apart one of her scripts,’ and reiterated her complaints to the reporter’s husband – who did not work for the station – so he could berate her too.

And CeFaan Kim, now an ABC News correspondent, told the magazine that he once complained to HR after colleagues told him that if he did not chip in to buy Rabinovich a holiday gift, she would retaliate. 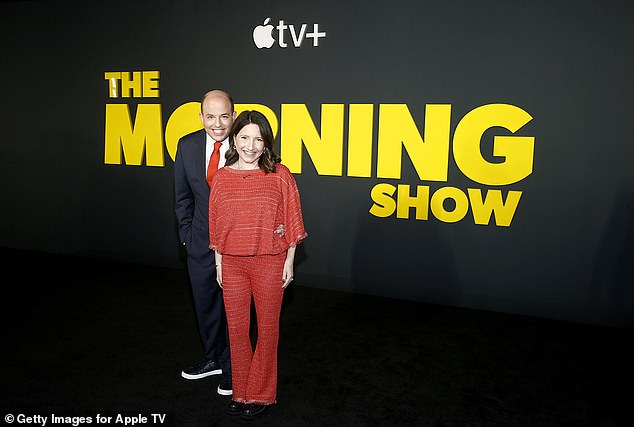 Stelter reportedly met her husband Brian after her NY1 co-anchor Pat Kiernan set the two up. They now live in the Lincoln Square neighborhood on the Upper West Side of Manhattan with their son and daughter

Stelter reportedly met her husband Brian after her NY1 co-anchor Pat Kiernan set the two up. They now live in the Lincoln Square neighborhood on the Upper West Side of Manhattan with their son and daughter.

In recent weeks Brian has experienced his own career troubles.

The Father’s Day episode of his show, ‘Reliable Sources’ drew only 656,000 viewers and was the least-watched episode of 2021, marking the 12th consecutive week Brian’s show failed to hit one million views, as critics slam him for being bias.

Brian, who has been referred to by critics as CNN’s ‘hall monitor,’ first came under scrutiny earlier this month when he seemed to ask White House Press Secretary Jen Psaki only softball questions in an exclusive one-on-one interview.

His first question to her was, ‘What does the press get wrong when covering Biden’s agenda?’

Psaki replied: ‘Some of our muscles have atrophied a little bit over the last few years, and there isn’t a lot of memory — recent memory or longer memory — on how long it takes to get legislation forward or how messy the process of negotiating and the process of getting legislation across the finish line can be.

‘So we know, we understand everybody is always looking for a deadline, a timeline, things like that,’ she continued. ‘I don’t know if that’s the press getting it wrong. I’ll leave you to the critique of that, Brian.’

Afterward, Pulitzer Prize-winning journalist Glenn Greenwald, who broke one of the Edward Snowden stories, tweeted it was ‘one of the most sycophantic interviews of a state official you’ll ever see.’

McEnany maintains that during a one-on-one interview Brian conducted with Psaki, the issue was never mentioned either during the CNN interview or by the White House press pool during a daily press briefing.

And just last week, Brian came under fire again for comments he made that some YouTubers draw more viewers that cable news.

‘They were describing it as if they were entitled to viewers,’ Joe Rogan said on his podcast ‘The Joe Rogan Experience. ‘This is because the market has spoken and your show’s f**ing terrible. 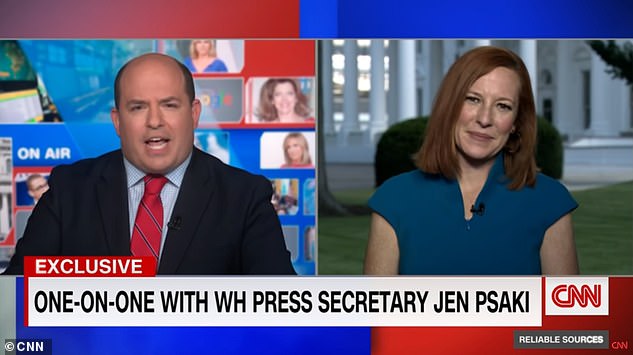