Subway has defended the tuna it uses in its sandwiches and blasted the findings of two lab reports that found that the filling  doesn’t contain any of tuna DNA.

The fast food chain hit out the day after New York Times revealed it had sent more than 60 inches worth of tuna sandwiches to a lab after ordering them from the fast food franchise at various Los Angeles locations.

The unnamed lab conducted a $500 PCR test to determine if the Subway tuna was one of five different species, but found ‘no amplification products from the DNA’ and so they ‘cannot identify the species.’

Earlier this year, a separate class-action lawsuit was filed against the fast food franchise alleging misrepresentation of the fish in their sandwiches after a similar DNA test.

But the chain said in a statement to  FOX Business on Thursday: ‘A recent New York Times report indicates that DNA testing is an unreliable methodology for identifying processed tuna.

‘This report supports and reflects the position that Subway has taken in relation to a meritless lawsuit filed in California and with respect to DNA testing as a means to identify cooked proteins.

‘DNA testing is simply not a reliable way to identify denatured proteins, like Subway’s tuna, which was cooked before it was tested.’

A tuna sandwich from Subway is displayed in San Anselmo, California. A recent lab analysis of tuna used in Subway sandwiches commissioned by the New York Times did not reveal any tuna DNA in samples taken from Subway tuna sandwiches

In the Times study, a reporter ordered the sandwiches without cheese or vegetables to avoid contaminating the test.

The reporter proceeded to remove the tuna meat from the sandwiches before freezing it, then sending it to a commercial food testing lab.

The lab involved in the latest tests declined to be named, citing concern about jeopardizing future professional opportunities.

A spokesman from the lab hinted at two possible conclusions.

‘One, it’s so heavily processed that whatever we could pull out, we couldn’t make an identification. Or we got some and there’s just nothing there that’s tuna.’

However, it was also taken into consideration that when tuna is cooked and seasoned, its DNA is more difficult to locate.

That is because cooked tuna becomes denatured, destroying its characteristics and making it difficult to identify. 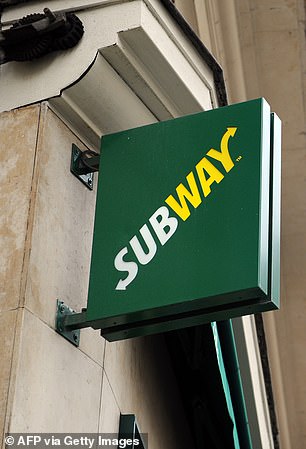 There are 15 species of fish that can be considered tuna, but Subway states they sell skipjack and yellowfin tuna, which a lab would know as Katsuwonus pelamis and T. albacares, respectively.

‘It is sourced from fisheries with non-threatened stock levels,’ the company’s Tuna and Seafood Sourcing statement says.

The plaintiffs claim that they performed independent lab tests of samples of tuna taken from several Subway locations in California.

The tests prove that the ‘tuna’ is actually a ‘mixture of various concoctions that do not constitute tuna, yet have been blended together by [Subway] to imitate the appearance of tuna,’ according to the complaint.

The complaint does not specify what the lab tests revealed or what the tuna is actually made of.

Dhanowa and Amin want to have their claim certified as a class action, which would allow thousands of other potentially dissatisfied customers to join in the legal action.

Anyone wishing to join the lawsuit would have had to purchase a tuna sandwich or tuna wrap sometime after January 21, 2017.

Dhanowa and Amin are suing Subway for fraud, intentional misrepresentation, unjust enrichment, and other civil violations.

They recently issued a new filing, however, seemingly retreating slightly from their original claim and alleging their lawsuit is about if Subway uses ‘100% sustainably caught skipjack and yellowfin tuna.’

Subway does not comment on where they get their tuna from, but a California store manager revealed the ‘tuna comes in a case and inside the case, there are six aluminum pouches and it’s just like a pressed, vacuum sealed slab of tuna.’

She described it as ‘flaky’ and ‘clearly soaked in water’ when it arrives, before it is spread out and mixed with mayo.

Tuna can stay in the refrigerated sandwich bar located in stores for up to 72 hours, she added, per corporate guidelines.

A former employee told the Times that she didn’t believe the company was swapping tuna out.

‘I personally have a really weak stomach to fish, which is how we know the tuna is real,’ she stated.

Still, many people on social media couldn’t help but to rag on Subway for the latest hit to the company.

‘There is about as much courage DNA in the Republican Party as there is tuna DNA in a Subway sandwich,’ Dan Rather sarcastically tweeted.

One user tweeted, ‘the subway tuna fish sandwich is most likely people and i think that’s fine.’ 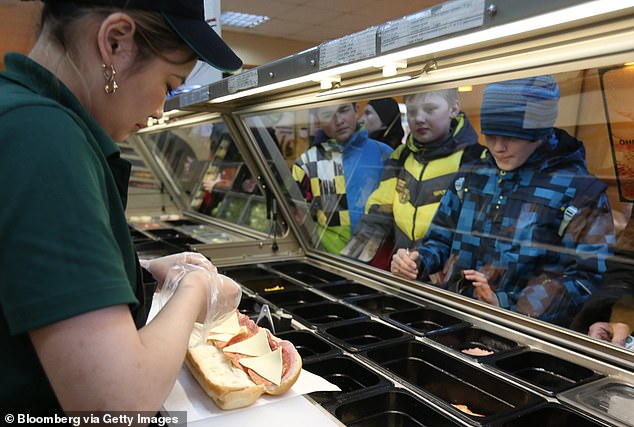 A lab found ‘no amplification products from the DNA’ and so they ‘cannot identify the species’ (Pictured: A Subway employee prepares a sandwich in Moscow, Russia)

Subway has previously denied claims that the tuna is bogus, telling DailyMail.com it is real and from fish caught in the wild.

A Subway representative told DailyMail.com: ‘These claims are meritless.’

‘There simply is no truth to the allegations in the complaint that was filed in California,’ a company spokesperson told DailyMail.com.

‘Subway delivers 100 per cent cooked tuna to its restaurants, which is mixed with mayonnaise and used in freshly made sandwiches, wraps and salads that are served to and enjoyed by our guests.

‘The taste and quality of our tuna make it one of Subway’s most popular products and these baseless accusations threaten to damage our franchisees, small business owners who work tirelessly to uphold the high standards that Subway sets for all of its products, including its tuna.’

Subway is the fast food chain with the largest number of restaurants both in the United States and worldwide.

There are more than 40,000 Subway locations worldwide, with tuna sandwiches proving to be one its best sellers. It’s the only seafood sandwich they sell.

‘Subway’s tuna sandwich ranks among our guests’ favorite sandwiches,’ a spokeswoman from the company said.

Tuna is very popular in the United States, with Nielsen Holdings reporting around 700 million cans sold in 2020.

Grand View Research claims the canned tuna market in 2020 was valued at $8.57 billion, likely due to the rush for canned food during the coronavirus pandemic.