An American middle school teacher and body positivity advocate is going viral for shining a spotlight on the obstacles that fat people face while traveling.

Mary Fran Donnelly, 27, has shared a pair of TikTok videos she calls ‘Traveling as a Fat Person,’ in which she shows how a hotel she stayed at was clearly unequipped to serve anyone with an overweight body.

Though the struggles she faces are no doubt frustrating, May Fran spends the entire video laughing about the problems, and has earned millions of views in the process.

Size exclusive: Mary Fran Donnelly, 27, has shared a pair of TikTok videos she calls ‘Traveling as a Fat Person,’ where she highlights the struggles she faces while going on vacation 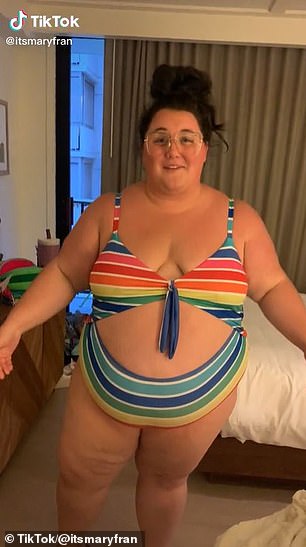 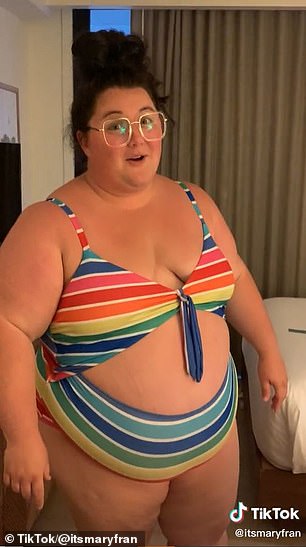 ‘Welcome to “Our Hotel’s Fatphobic,” with me, your host, your resident fata**, Mary Fran,’ she begins the first video, which has been viewed 1.5 million times

‘Welcome to “Our Hotel’s Fatphobic,” with me, your host, your resident fata**, Mary Fran,’ she begins the first video, which has been viewed 1.5 million times.

‘Come hither, let’s take a look at the bathroom,’ she continues, walking into the hotel bathroom as her sister can be heard laughing hysterically off-camera.

‘As one might see, it looks normal. Would you like to take a pee or a poop? Don’t worry, you’ll barely fit,’ she says, gesturing toward the toilet.

She then demonstrates, sitting down on the toilet and showings how snugly she is squeezed in between the sink and wall.

She demonstrates this, too, showing how the bath towel doesn’t fully wrap around her body — and barely covers her length-wise, either. 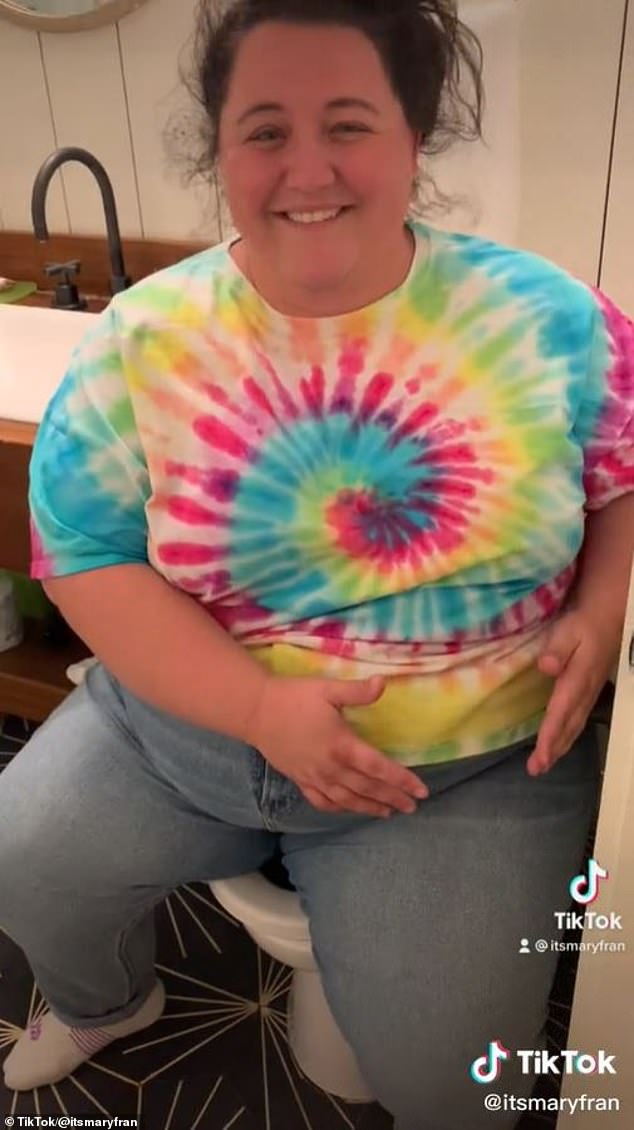 Snug: She warns that ‘you’ll barely fit’ on the toilet, which is crammed between a wall and the sink 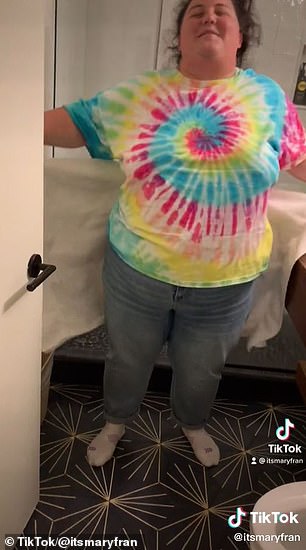 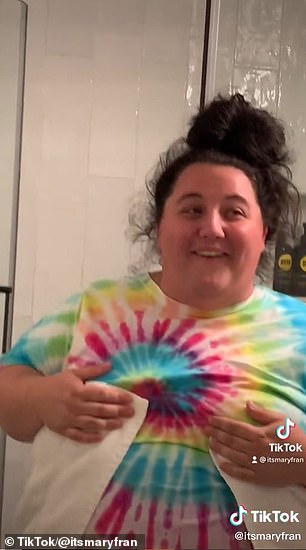 In a follow up video, which has earned over 5.1 million views, Mary Fran addresses the camera in a rainbow swimsuit.

‘The theme of this episode is amenities!’ she says. ‘Let’s talk about pool towels, because as we know, towels at hotels suck. So, when you get a pool towel, it’s a little bigger but not much.

‘So you get to choose, is it gonna cover the front or the back?’ she asks, showing how the pool towel covers more of the length of her body but still doesn’t close around her.

‘Now after swim, maybe you want to go sit on the balcony. Come along,’ she says, laughing as she walks out to the room’s balcony.

‘Oh look, a lovely table with a chair. Will it house me? I’m not too sure,’ she says, wincing as she sits in the small metal chair.

‘Comfortable,’ she says, unconvincingly. ‘But unstable.’ 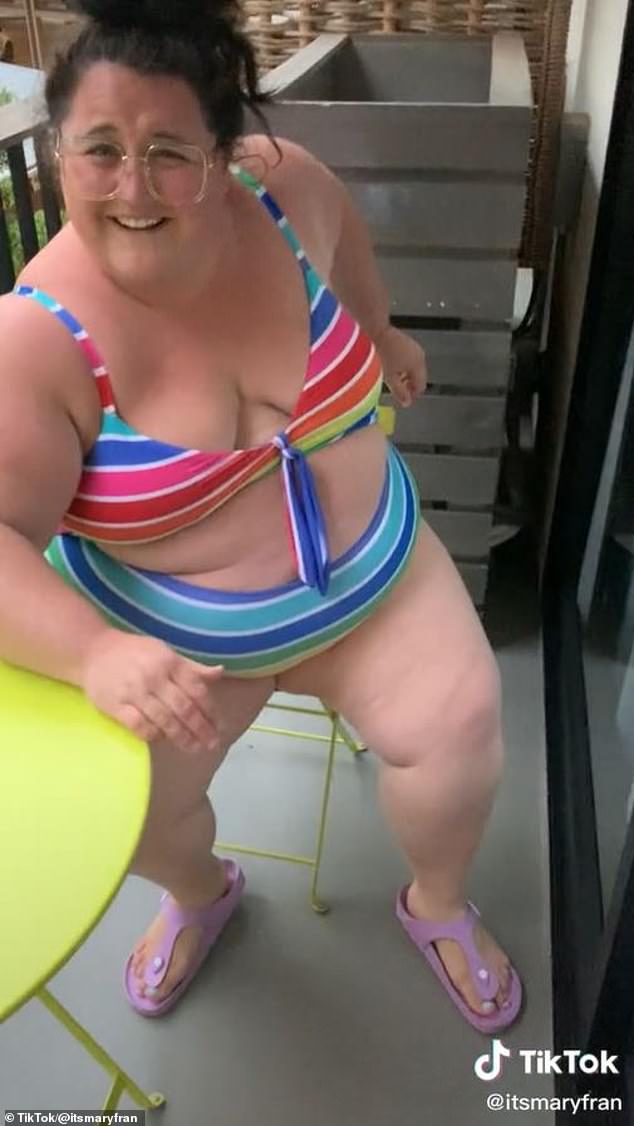 Uncomfortable: A chair on the balcony is small and ‘unstable’ when she sits on one 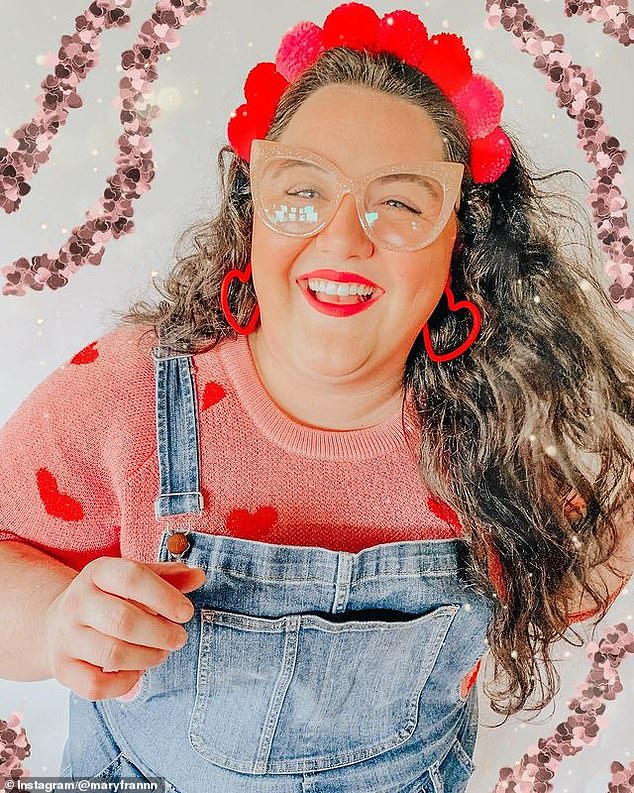 The videos have been met with enthusiastic support, especially from other TikTok users who can relate to the problems she describes.

‘This is why I bring my own towels when I travel,’ wrote one.

‘I feel this!’ wrote another. ‘I’m a hotel manager and our bathrooms are so tiny and I desperately wish we could expand them but it’s just not physically possible.’

Mary Fran told BuzzFeed that she uses humor to cope, but that doesn’t mean that the issues she addressed in the video weren’t upsetting.

‘I was making light of a situation that is a very real stress for fat, plus-size people,’ she said.

She listed questions that go through her mind on every trip. 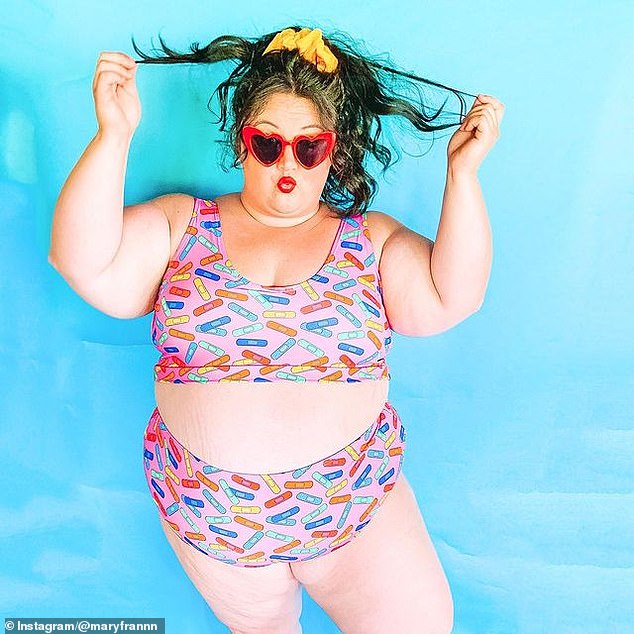 Serious! Though Mary Fran makes a joke of the experience, she said that it’s ‘a very real stress’ and the travel industry should ‘reevaluate their practices 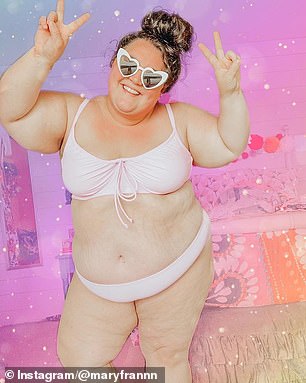 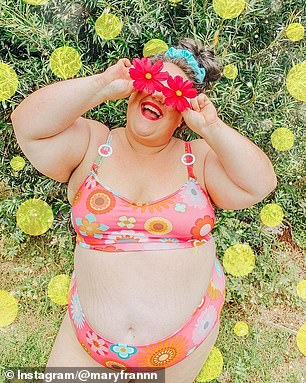 ‘Fat, plus-size people deserve to be seen as valid human beings in an industry that should cater to everyone’s size and physical needs,’ she said

‘People [are] commenting about [how] these little things, like hotel towels, lounge chairs, and toilet placement, aren’t an isolated worry for one person; there is a whole community of people that feels the same way. And those people [are] giving thousands of recommendations on how to alleviate some of that stress.’

She acknowledged that most people probably don’t even think about the challenges that plus-size people face, but insists they should.

‘Body shapes and image have become so relevant in recent years that there isn’t any excuse as to why hotel and travel industries cannot begin to reevaluate their practices,’ she said.

‘Fat, plus-size people deserve to be seen as valid human beings in an industry that should cater to everyone’s size and physical needs.’