NASA‘s Ingenuity helicopter has flown its tenth flight on Mars, clocking up a total of one mile since its first flight in April.

On Saturday (July 24), the robotic copter reached a height of 40 feet (12 metres) – its highest point yet – over a region on the planet called Raised Ridges.

Raised Ridges is a collection of rock features in the Jezero Crater – an ancient river delta that may once have harboured life – from which NASA’s six-wheeled car-sized rover Perseverance could collect samples.

Perseverance is currently heading south from its landing spot on the Jezero Crater, while Ingenuity is scouting locations to help it plot its way on the ground.

Photo of NASA ‘s Ingenuity helicopter taken during its tenth flight. NASA said it was the ‘most complex’ flight yet 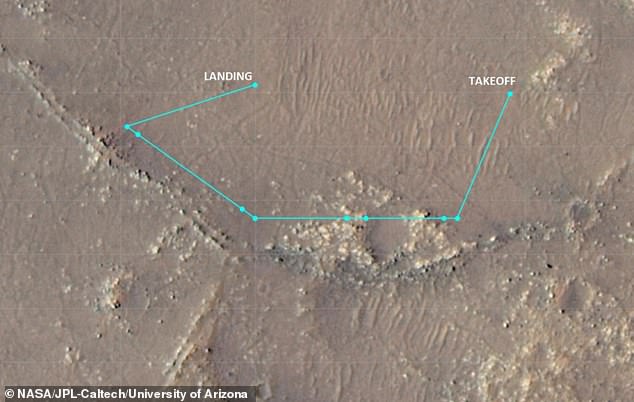 Flight one: April 19, 2021 with a vertical takeoff up to 9.8ft, stationary hover and a landing

Flight two: April 22, 2021 with a vertical takeoff up to 16ft, hover, then shift westward for 14ft before returning and landing

Flight three: April 25, 2021 with a vertical takeoff up to 16ft, hover, shift northwards for 328ft at an airspeed of 2 m/s before returning to land

Flight nine: July 5, 2021 with a record length of 2,050ft southwest over a prospective research location at 16ft per second.

NASA called the tenth flight Ingenuity’s ‘most complex’ yet in its efforts to support Perseverance in its mission to search for signs of ancient life on Mars.

Like on previous flights, Ingenuity snapped ‘selfies’ of its shadow on the planet’s surface.

Ingenuity is equipped with two cameras of its own its its cube-shaped base – one colour camera with a horizon-facing view for terrain images and one black-and-white for navigation.

Ingenuity arrived on Mars attached to the belly of Perseverance, which touched down on Mars on February 18 after a nearly seven-month journey through space.

Perseverance made its first test drive on Mars on March 4, and on April 4, NASA confirmed that Ingenuity has been dropped to the surface of Mars from Perseverance’s ‘belly’ in preparation for its historic flight.

NASA also said on April 5 that Ingenuity had survived its first night on the Martian surface – a major milestone because surface temperatures can plunge as low as -130°F (-90°C).

The copter, which is just 18-inches tall, made its first flight on April 19, 2021, making history as the first powered controlled flight on any planet other than Earth.

In a nod to this feat, Ingenuity carries a small amount of fabric that covered one of the wings of the Wright brothers’ aircraft, known as the Flyer, during the first powered, controlled flight on Earth in 1903.

For the first flight, Ingenuity took off, climbed to about 10 feet (3 meters) above the ground, hovered in the air briefly, completed a turn and then landed.

After that, the helicopter successfully performed additional experimental flights of incrementally farther distance and greater altitude, culminating with the tenth flight on Saturday. 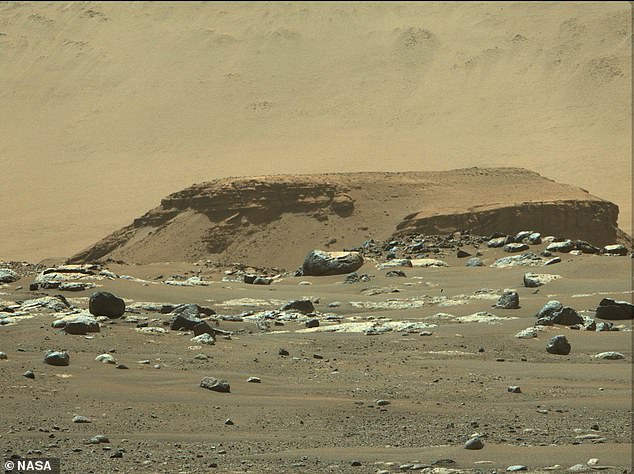 The first five flights throughout April and May were part of a ‘technical demonstration’ to prove something could fly on Mars.

During its sixth flight on May 23, Ingenuity experienced a bit of a wobble due to some ‘unexpected motion’ in the final few feet.

This motion was from an ‘image processing issue’ but it ‘muscled through’, NASA JPL tweeted at the time.