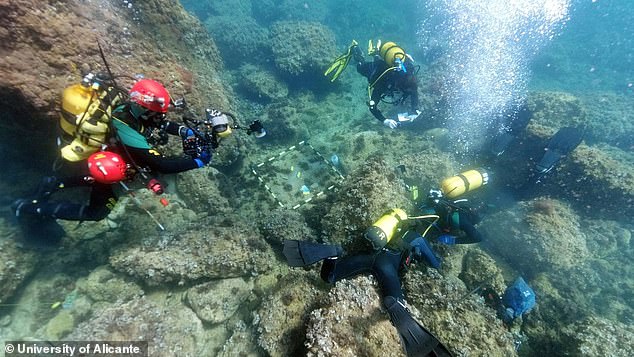 By Ed Wight For Mailonline


Amateur freedivers have found one of Europe’s largest hoards of gold Roman coins while on holiday off the coast of Spain.

Thought to have been hidden from barbarian invaders around 1,500 years ago, the stash was discovered by two brothers-in-law cleaning rubbish from the seabed in Alicante.

Despite lying on the seabed since the late 4th and early 5th century, the 53 intact gold coins are said to be in ‘a perfect state of conservation’ enabling researchers to read inscriptions and identify Roman emperors.

Jaime Molina from the University of Alicante said: ‘This is one of the largest sets of Roman gold coins found in Spain and Europe.

‘It’s an exceptional archaeological and historical find since its investigation can offer a wealth of new information to understand the final phase of the fall of the Western Roman Empire.’

Brother-in-laws Luis Lens and César Gimeno came across the extraordinary discovery seven metres deep off the coastal town of Xàbia. 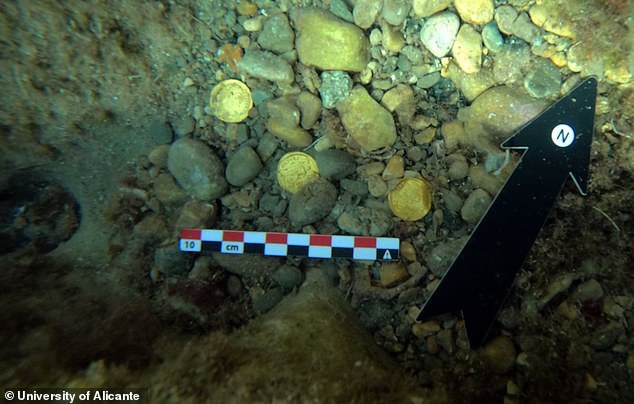 Thought to have been hidden from barbarian invaders around 1,500 years ago, the stash was discovered by two brothers-in-law cleaning rubbish from the seabed in Alicante 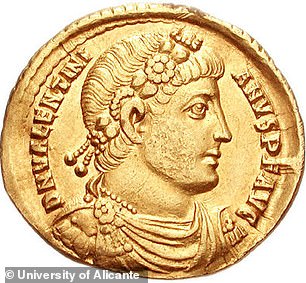 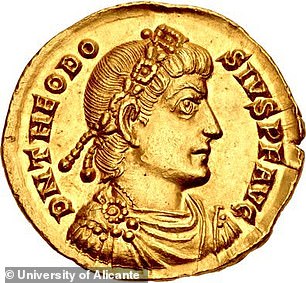 Lens told local media: ‘I thought I had found what looked like a 10 cent coin.

‘It was in a small hole, like a bottleneck.’

But after returning to his boat he took a closer look and discovered ‘an ancient image, like a Greek or Roman face’ and thought it was a lost gem.

The two brothers-in-law then returned to the site and using a corkscrew and Swiss Army knife spent two hours digging up the rest of the treasure. 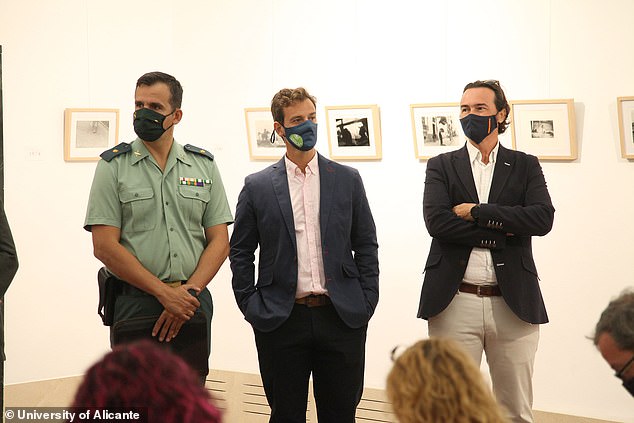 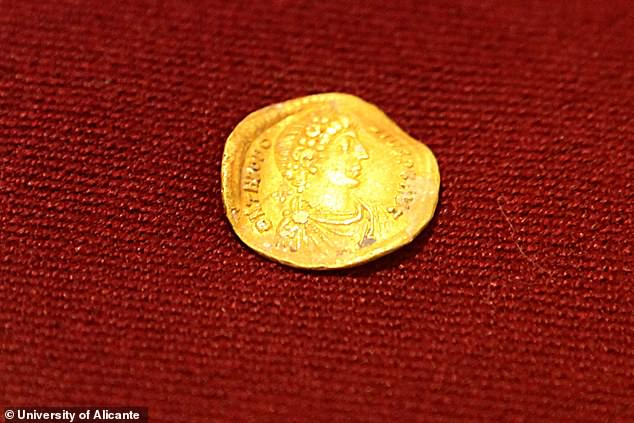 One of the 10 coins discovered that depicts Honorius, who was Roman emperor from 393 to 423

Molina said: ‘There are no remains of sunken ships in the area where they were found so it is probably a voluntary concealment from the arrival of the barbarians to the coast of Hispania, in this case, the Alans.’

He added: ‘This finding speaks to us of a context of fear, of a world that is ending, that of the Roman Empire. 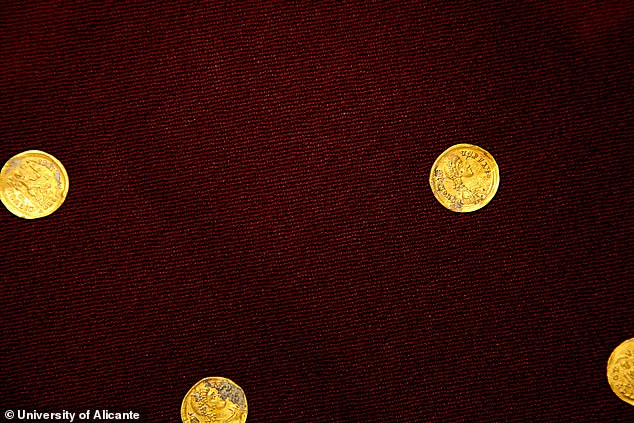 The coins will now be cleaned up and exhibited at a local museum, the University of Alicante revealed

‘The find illustrates a historical moment of extreme insecurity with the violent arrival in Spain of the barbarian peoples and the definitive end of the Roman Empire in the Iberian peninsula from 409 AD.’

The coins will now be cleaned up and exhibited at a local museum.

The bay of Portitxol in Xàbia is an area well known for the abundance of underwater archaeological remains.

How England spent almost half a millennium under Roman rule

55BC – Julius Caesar crossed the channel with around 10,000 soldiers. They landed at a Pegwell Bay on the Isle of Thanet and were met by a force of Britons. Caesar was forced to withdraw.

54BC – Caesar crossed the channel again in his second attempt to conquer Britain. He came with with 27,000 infantry and cavalry and landed at Deal but were unopposed. They marched inland and after hard battles they defeated the Britons and key tribal leaders surrendered.

However, later that year, Caesar was forced to return to Gaul to deal with problems there and the Romans left.

54BC – 43BC – Although there were no Romans present in Britain during these years, their influence increased due to trade links.

43AD – A Roman force of 40,000 led by Aulus Plautius landed in Kent and took the south east. The emperor Claudius appointed Plautius as Governor of Britain and returned to Rome.

47AD – Londinium (London) was founded and Britain was declared part of the Roman empire. Networks of roads were built across the country.

50AD – Romans arrived in the southwest and made their mark in the form of a wooden fort on a hill near the river Exe.  A town was created at the site of the fort decades later and names Isca.

When Romans let and Saxons ruled, all ex-Roman towns were called a ‘ceaster’. this was called ‘Exe ceaster’ and a merger of this eventually gave rise to Exeter.

122AD – Emperor Hadrian ordered that a wall be built between England and Scotland to keep Scottish tribes out.

312AD – Emperor Constantine made Christianity legal throughout the Roman empire.

228AD – The Romans were being attacked by barbarian tribes and soldiers stationed in the country started to be recalled to Rome.

410AD – All Romans were recalled to Rome and Emperor Honorious told Britons they no longer had a connection to Rome.

Source: History on the net