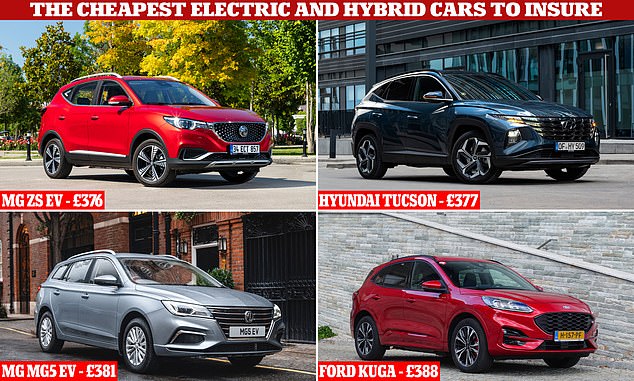 The MG ZS is the cheapest of all electric and hybrid new cars to insure, new research has revealed.

Drivers with this electric car typically pay £376 a year on average for their premiums, according to data from Admiral.

It revealed the second cheapest car is a hybrid model, Hyundai Tucson, which costs costs £1 a year more on average to insurance than the MG ZS.

Drivers with the MG ZS EV will be paying just £376 a year for their premiums, Admiral found

In recent years, more drivers have been willing to take the plunge for an electric car – although it remains to be seen if the current energy crisis will feed through to nervousness about having a vehicle that requires being charged by the grid.

Meanwhile, production problems from a global microchip shortage has resulted in waiting lists for new cars – including EV ones, heavily reliant on computer technology – can now be more than a year.

But that aside, insurer Admiral has analysed car sales from the second quarter of this year and created a list of the ten ‘eco’ cars for This is Money which offer the most competitive cover, including a mixture of pure electric vehicles and hybrids.

The research highlighted that, despite concerns electric cars are more expensive to insure due to the high cost of repairing or replacing any damage to the batteries, electric vehicle insurance can be affordable – depending on the car you opt for.

The MG ZS was first unveiled earlier this year with the small SUV available to buy  from £26,095.

Meanwhile, the Tucson is a compact crossover SUV that is billed as a perfect family car and starts from £26,221. 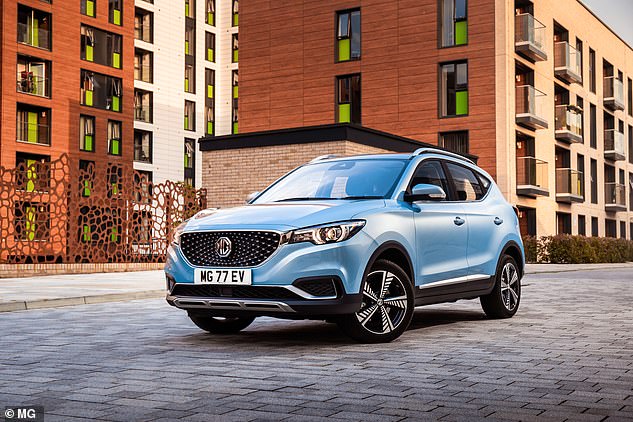 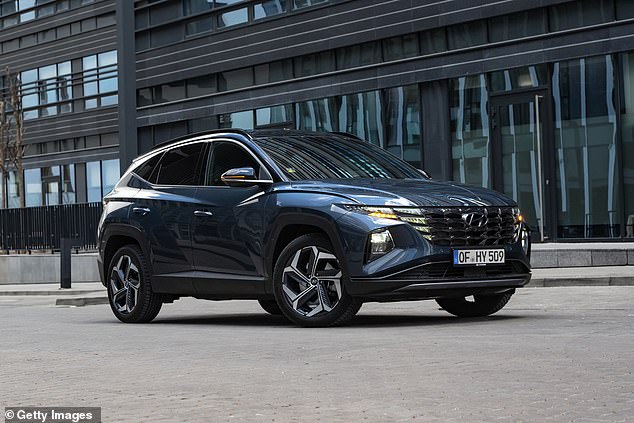 The hybrid Hyundai Tucson is billed as a family car and is available from just over £26,000

Another electric MG came in third place with the MG5 EV offering average annual premiums of £381 a year.

Meanwhile, the Ford Kuga, a hybrid, was also on the list and came in fourth place with annual premiums of £388.

The Kuga is a family car starting from £26,445 with a 2.5litre engine and a battery-powered electric motor. 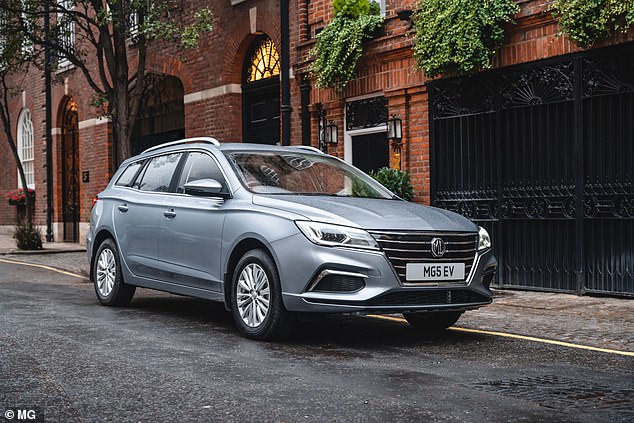 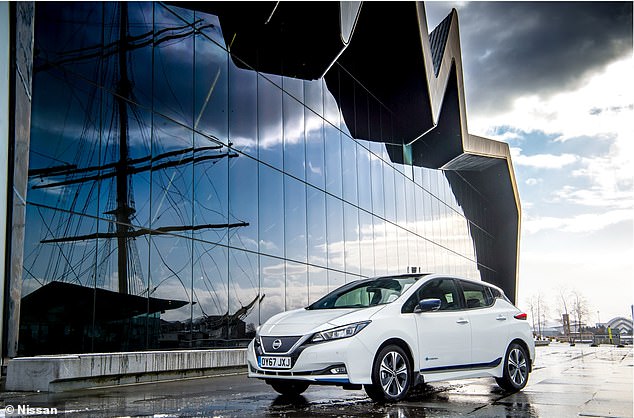 The Nissan Leaf has a range up to 239 miles, with the electric vehicle billed as the perfect ‘family car’

Moving down the list, the electric Smart EQ is in sixth place with average premiums of £418 a year.

This is closely followed by the Renault’s electric Zoe with a yearly cost of £422 and the electric Peugeot E-208 costing £424.

The Zoe, with a starting price of £27,595, is one of the most popular models and was named Best Small Electric Car for Value 2021 by What Car?

With a 52 kWh capacity, the battery in Zoe E-Tech electric allows you to drive up to 245 miles. 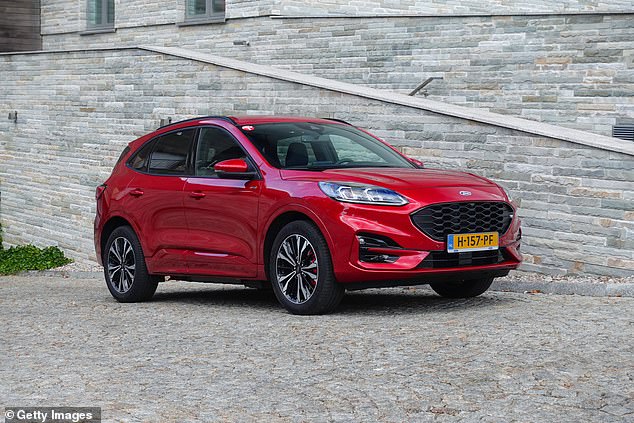 The Ford Kuga hybrid model is a family car starting from £26,445 with a 2.5litre engine 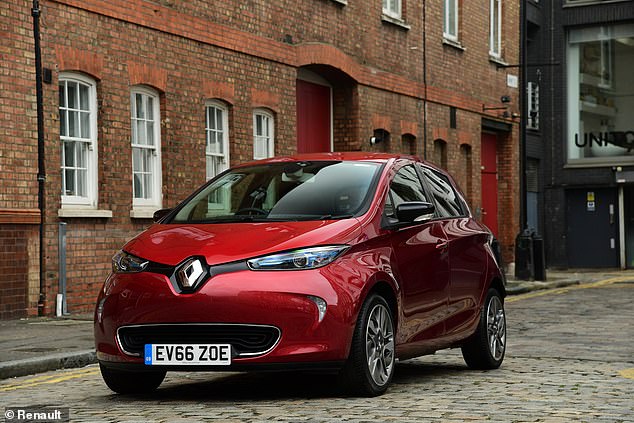 The Renault Zoe 100% electric car has been named Best Small Electric Car for Value 2021 by What Car?

BMW’s electric i3 is in ninth place at £431 whilst the electric Nissan Leaf finishes in tenth at £436.

The German manufacturer claims the i3 can get drivers from London to Brighton, and back again, on just one charge with an all-electric range of up to 182 to 190 miles.

Meanwhile, the Nissan Leaf is another of the most popular EVs with a range up to 239 miles.

Why are people buying EVs?

While a large chunk of drivers have reservations about owning an electric vehicle, UK registrations of electric and plug-in hybrid cars passed half a million in May this year, according to the latest statistics.

Demand is increasing as motorists look to become more environmentally friendly, prices of the models are slowly decreasing and petrol and diesel will begun to be phased out.

Clare Egan, head of motor product at Admiral, said: ‘With the ban on sales of new petrol and diesel cars coming into play in less than 10 years, more people are looking to make the switch to an electric vehicle.

‘While fuel costs are lower for electric vehicles and they’re exempt from vehicle tax, it’s no secret that hybrid and electric cars are generally more expensive to buy compared with petrol or diesel alternatives. 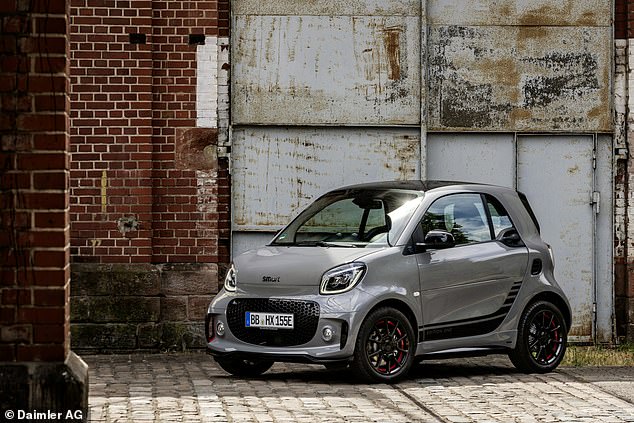 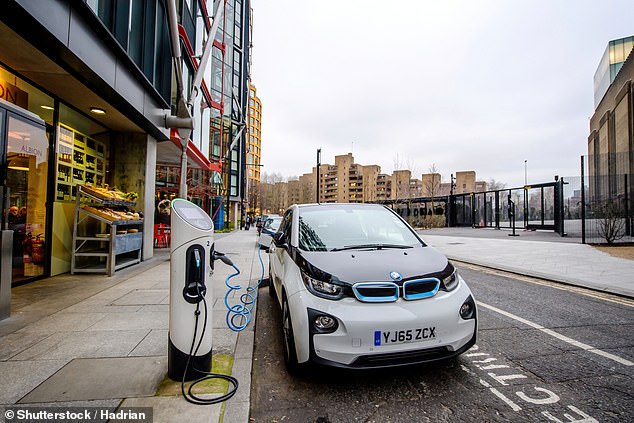 The BMW i3 can get drivers from London to Brighton, and back again, on just one charge

‘It’s therefore important that motorists can work out some of the additional running costs to help find a make and model that’s affordable for them.

‘Whether you’re looking to buy an SUV or smaller run-around town type of car, it’s useful to understand how much you might be spending on average on your annual insurance premium before buying a new car.’

Are EV and hybrid prices decreasing?

As seen in the above prices, it is now becoming cheaper to insure electric vehicles and hybrid cars as they become more popular.

Clare Egan, Head of Motor Product at Admiral, said: ‘All sorts of things can affect the cost of insurance for an EV and there are multiple things to consider when calculating the cost of insuring one.

‘Over time we have seen manufacturers releasing more affordable EV models. These will, in general, be less expensive to repair in the event of a claim and therefore attract lower premiums than the more expensive EV models.

‘It is also important to note that average car insurance premiums have fallen across the entire industry not just EV alone.

‘At Admiral we want to encourage the adoption of Electric Vehicles so make sure that our pricing for EVs is very competitive.’

SAVE MONEY ON MOTORING