Apple may soon be forced to mothball its proprietary lightning connector as the EU unveiled plans to force all new smartphones to use USB-C as standard from 2022.

The planned change, announced today, would not affect the majority of device manufacturers, as many have already adopted the fast-charging connector design.

If delivered, the move would achieve a goal the European bloc has been working on for more than a decade — with Apple the primary holdout against a unified standard.

Manufacturers will be given two years to ensure devices support the new standard.

Since 2012, iPhones have come with the company’s own Lightning port and connecting cables — which replaced the previous 30-pin connector.

However, the newest models have been shipping with a lightning-to-USB-C adapter cable which allows the iPhone to be connected to a USB-C socket if needed.

The push by the EU will certainly be cheered by the millions of people who have searched through a drawer full of cables for the right charger.

However, officials reportedly also want to cut down on the 11,000 metric tons of electronic waste thrown out every year by Europeans.

Apple has long countered this argument with the suggestion that forcing users away from the lightning cable would instead create an ‘unprecedented volume‘ of waste.

In addition, they have argued, the switch could cost consumers up to €1.5billion.

WHY APPLE HAS RESISTED USB-C

Apple has long been a thorn in the side of the EU’s plans to force a unified standard for charging cables.

Apple claims that changing its iPhone charging ports to USB-C would ‘stifle innovation’.

Speaking last year, an Apple spokesperson said: ‘We believe that regulations that impose harmonization of smartphone chargers would stifle innovation rather than encourage it.

‘It will harm consumers in Europe and the economy in as a whole.’

It is believed that the firm also favours its proprietary cable for its higher waterproof-rating than USB-C.

In addition, Apple is able to regulate the quality of lightning cables and accessories through its ‘Made for ‌iPhone‌’ program.

This is also a source of profit that the firm is likely reluctant to part with.

However, Apple did switch its iPad tablets to USB-C back in 2018.

‘Apple stands for innovation and deeply cares about the customer experience,’ an Apple spokesperson told MailOnline.

‘Some of the most innovative thinking at Apple goes toward building products with recycled and renewable materials.

‘We share the European Commission’s commitment to protecting the environment and are already carbon neutral for all of our corporate emissions worldwide, and by 2030 every single Apple device and its usage will be carbon neutral.

‘We create products that enhance people’s lives, making everyday tasks easier and more efficient, including how you charge and transfer data on your device.

‘We remain concerned that strict regulation mandating just one type of connector stifles innovation rather than encouraging it, which in turn will harm consumers in Europe and around the world.

‘We look forward to continued engagement with stakeholders to help find a solution that protects consumer interest, as well as the industry’s ability to innovate and bring exciting new technology to users.’

The tech firm added that they are working with the European Commission to understand the details of the proposed regulations, calling the transition period both short and a ‘major concern’.

Apple also expressed the hope that the EU will continue to allow existing phone models to be sold in order to prevent the premature disposals of phones as part of trade-ins for newer models.

It is estimated that some 420 million mobile phones and other portable electronic devices were sold in the European Union last year — many of which require charging or data transfer cables in order to be used.

According to the European Commission, the average person living in the union owns at least three chargers. Of these, two are used on a regular basis.

However, 38 per cent of people have reported not being able to charge their phones at least once because they could not find a compatible charger.

‘With more and more devices, more and more chargers are sold that are not interchangeable or not necessary. We are putting an end to that.

‘With our proposal, European consumers will be able to use a single charger for all their portable electronics.

This, he concluded, is ‘an important step to increase convenience and reduce waste.’ 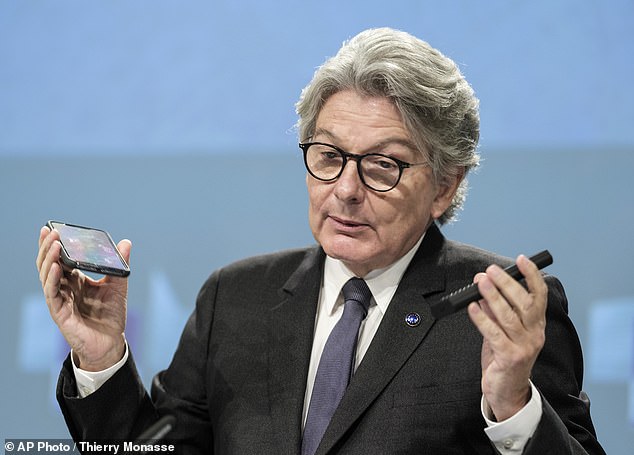 ‘Chargers power all our most essential electronic devices,’ said EU internal market commissioner Thierry Breton (pictured here at the EU’s Brussel headquarters during a media conference that was held today). ‘With more and more devices, more and more chargers are sold that are not interchangeable or not necessary. We are putting an end to that’

‘European consumers were frustrated long enough about incompatible chargers piling up in their drawers,’ added the European Commission’s executive vice-president for ‘Europe Fit for the Digital Age’, Margrethe Vestager.

‘We gave industry plenty of time to come up with their own solutions, now time is ripe for legislative action for a common charger.

‘This is an important win for our consumers and environment and in line with our green and digital ambitions,’ she added.

According to the UN, a shocking 52.7 million tons of electronic waste — including phones, TVs and other gadgets — was disposed of back in 2019.

This figure, the equivalent in mass of 350 cruise ships, was an increased of 9.1 million tons on the same measure taken back in 2014 and is expected to reach 72.8 million tons by 2030 — almost doubling in just 16 years, experts warned.

The push by the EU will certainly be cheered by the millions of people who have searched through a drawer full of cables for the right charger. Pictured: five common charging cable designs (from left-right): USB-A, USB-C, USB Mini B, USB Micro B and Apple’s Lightning cable

USB-C is an industry-standard connector for transmitting both data and power on a single cable.

It was developed by the USB Implementers Forum (USB-IF), the group of companies that has developed, certified and shepherded the USB standard over the years.

However, it is more oval in shape and slightly thicker.

One of the best features of the USB-C is its ‘flippability’, which means it doesn’t have a ‘correct’ orientation, and can be used either way.

‘Much to Apple’s despair financially, forcing universal chargers for all devices will create an easier way of life for those on the hunt for a charger,’ cyber security specialist Jake Moore told MailOnline.

‘However, when purchasing a genuine Apple Lightning cable, there is a given amount of trust bought with the product.

‘Therefore purchasers are guaranteed an authentic, robust and safe cable.

‘Third party developers of USB-C cables have the potential of having safety concerns or even being developed for the use in hacking.

‘Those purchasing any cable must do their research to make sure they are not buying a fake or dangerous product,’ he warned.

After attempting for more than a decade to cajole the industry into adopting a common standard, the EU’s executive commission is pushing the issue.

Under the proposed law, phones, tablets, digital cameras, handheld video game consoles, headsets and headphones sold in the European Union would all have to come with USB-C charging ports.

However, the legislation — which will form part of the EU’s Radio Equipment Directive — must still be scrutinised by Members of the European Parliament and their various national governments  before it can passed into active law.

The new update, which was revealed back in June, includes the ability to FaceTime with Androids and a new Live Text tool that can recognise handwriting from photos.

Notifications also have a new look, including contact photos and larger app icons to make them easier to identify.

iOS 15 includes the ability to FaceTime with Androids, a new Live Text tool that can recognise handwriting from photos and a redesigned Safari experience

Monday’s release of iOS 15, as well as iPadOS 15 and WatchOS 8 for tablets and smartwatches, comes ahead of the release of iPhone 13 tomorrow.

Rather than being restricted to the new device, iOS 15 runs on all Apple phones from 2015’s iPhone 6S and newer.

iPhone users can install the update by heading to the Settings app on their device, before tapping on General and then Software Update.