BOOK OF THE WEEK

Richard Browning found himself standing in a Wiltshire farmyard in 2016 with jet engines the size of hairdryers attached to his arms and legs by flexible poles taken from a pop-up tent.

The engines were controlled with a trigger taken from an old electric drill, linked to some electronics housed in a Tupperware box taped to Browning’s back. The technology was intended to help him fulfil his dream — to fly.

The plan was for the engines’ force to push against the ground and lift Browning into the air. The turbines were powerful — in fact they were too powerful.

The ones on his legs expelled air at such speed that they chipped the concrete beneath him, shooting fragments up into the engines themselves and shutting them down.

Starting in 2016 with hairdryers, Tupperware and sticky tape, Richard Browning, the British inventor of a ‘jet suit’, was determined to reach for the stars

Even when the system did work, its thrust was too much for Browning to control and he ended up flat on his face.

Two years later, though, after spending every spare minute working on the project, Browning was indeed as free as a bird. His suit — which has more power than a Formula 1 car — can lift him 25ft into the air, where he flies along at 50mph.

‘The motion is so exhilarating,’ he writes, ‘that if I’ve been flying throughout the day, when I eventually unclip the suit and walk around like everybody else, my movements seem limited, as if I’ve been shackled to some unseen object at the ankles.’

His young son christened the suit Daedalus, after the father of Icarus. They were the pair in Greek mythology who flew with wings made from feathers and wax. Icarus died when he ventured too close to the Sun and his wings melted.

The suit’s progression proves the old saying about genius being an infinite capacity for taking pains. Step by step, Browning tweaked things until his goal was achieved.

The problem of the leg engines was solved by swapping them for one larger engine on his lower back. This makes the power more controllable and avoids the turbines burning the soles of Browning’s feet. At one point, his wife stuffed a hosepipe down his boots to keep him cool.

Interspersed throughout the book are lessons you can learn from Browning’s success. Everybody offers such tips these days, from astronauts to TV chefs. 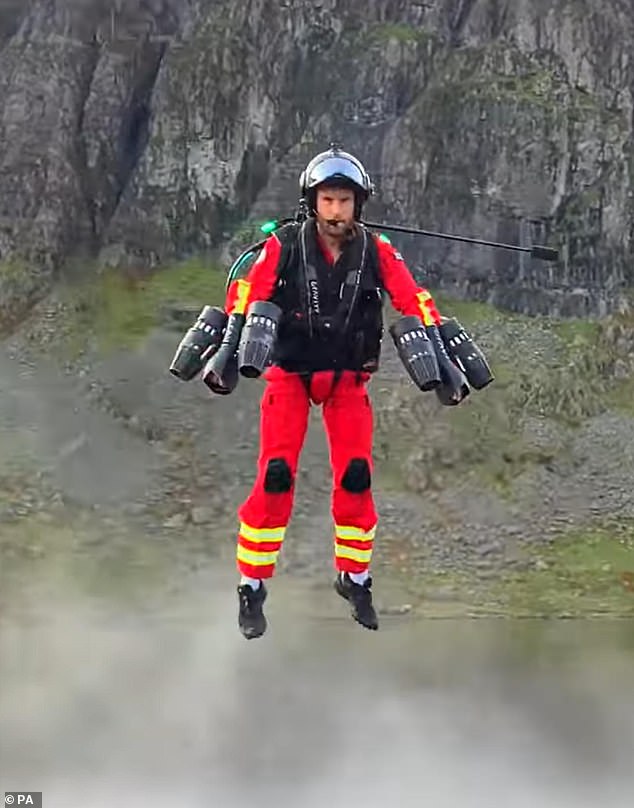 Two years later, though, crashes and burns, his suit – which has more power than a Formula 1 car – can lift him 25ft into the air, where he flies along at 50mph

But unlike many books of the genre, this one is engaging because Browning’s advice is so measured. Instead of extreme, ‘Be whoever you want, nothing can hold you back!’ cliches, he explores the fascinating grey area where dreams meet reality.

For example, he recommends being the ‘penguin on the outside’. Browning himself has always been a bit of a loner, but not completely without friends. This puts him on the edge of any social group, like a penguin huddling against the outside of a massive colony.

He recommends mimicking the position if you want to be innovative: ‘Do just enough to stay warm, but don’t move so deep into the colony that you can’t pick up on new ideas from elsewhere.’

Another tip is to think like a child: ‘When it comes to expanding the mind, try not to grow up.’ Browning cites the Marshmallow Challenge, an experiment that’s been repeated all over the world. Teams of architects, business people, military leaders and so on compete against each other — and against a team of children.

Each group is given sticky tape, skewers, Blu Tack and the like, and told to build a structure that supports a single marshmallow as far above the table as possible. The adults spend most of their time talking, drawing up plans and debating amongst themselves. The kids just start playing with the materials — and almost always win.

Browning has even harnessed a real child’s thinking. Demonstrating his suit at a school, he was asked by a pupil: ‘Could you do back-flips?’ The thought had never occurred to him, but he loved it. Two members of his team are working on it right now.

He once helped his own children build a home-made furnace, in which they melted aluminium and copper. Far from being dangerous, he sees supervised activities like this as the best way for kids to learn about risk.

‘Cocooned by a perpetual safety blanket, they can become careless and blind to potential dangers.’

Browning’s own father, Michael, was an aeronautical engineer. He and the young Richard used to build massive fireworks from several smaller ones. You can see how Browning Senior inspired his son’s later activities. But there’s one crucial difference, which gives the book a tragic power.

It was hard going, and eventually, when the money ran out and his business dreams came to an end, he sank into despair and took his own life. Richard was 15.

The book is dedicated to Michael. In a way Richard’s whole life has been a tribute to him.

You can only imagine how his father would have felt seeing Richard’s business (Gravity Industries) secure funding from a Californian billionaire. The deal was signed on a $100 note.

In the meantime, things are on the up, literally and metaphorically. The military are interested in Browning’s invention, he’s planning a series of races (pilots flying against each other around obstacle courses on lakes), and you can even buy one of the suits for yourself. Assuming you have $440,000, and can show Browning that you’ll fly it safely.

The only people bringing him back to Earth are the Swiss airport staff who refused to let his suit onto a flight. Which seems rather ironic.