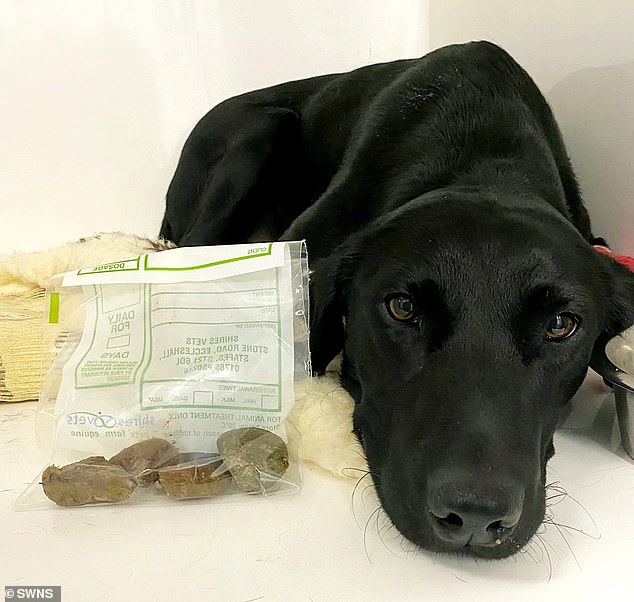 By James Bayley For Mailonline


A greedy dog is lucky to be alive after wolfing down a whopping 11 rocks during her daily walkies.

One-year-old Labrador Ellie-May was rushed to the vets for emergency surgery when her owners became concerned she was ill.

The family had been walking her in the woods near her home in Gnosall, Staffordshire earlier this month when Ellie-May gulped down the stones.

Ellie-May (pictured) swallowed 11 stones during her walkies in the woods of Staffordshire. Her owners became concerned for her health after she vomited up 7 pebbles after her breakfast

The pooch was quickly transferred to Linnaeus-owned Shire Vets in Eccleshall, Staffordshire, where she was promptly anaesthetised and examined.

After undergoing an X-ray, the vets and owners were amazed to see Ellie-May’s stomach was clogged with stones.

She said: ‘This was a pretty unique and remarkable case.

‘We took a series of abdominal radiographs which demonstrated multiple stones within the stomach, with the size and number of stones making it a very unusual occurrence. 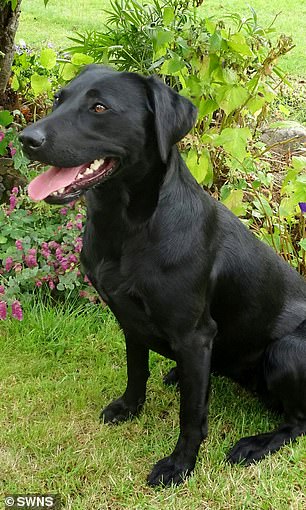 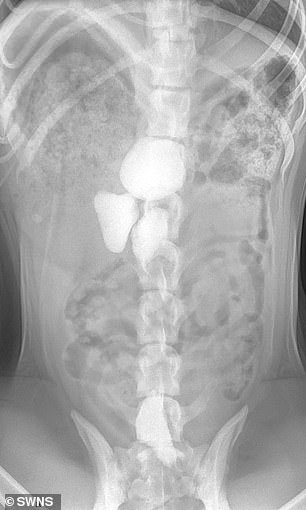 The size and number of stones made this a very unusual case according to the vets. In surgery, an incision was made into her small intestine to remove the large stones

‘Ellie-May promptly had an exploratory laparotomy (which is surgery to explore her abdomen), with an incision made into her small intestine to remove the large stones, and the rest of the intestine was checked to ensure no further stones.

‘The procedure was successful. All stones were removed and Ellie-May has now made a full and uneventful recovery.

‘She spent a couple of weeks recuperating, with exercise on her lead only for the first week due to the size of her abdominal wound, with this exercise gradually increased as her recovery progressed and the wound healed.’

Remarkably, Ellie-May has made a full recovery and has not swallowed anything but dog feed and treats since. 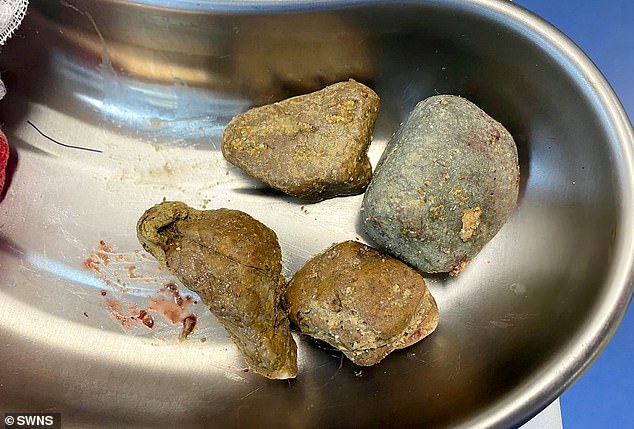 Quite the appetite: The one-year-old Labrador managed to swallow 11 pebbles during her walk but following emergency surgery Ellie-May is as fit as a fiddle again 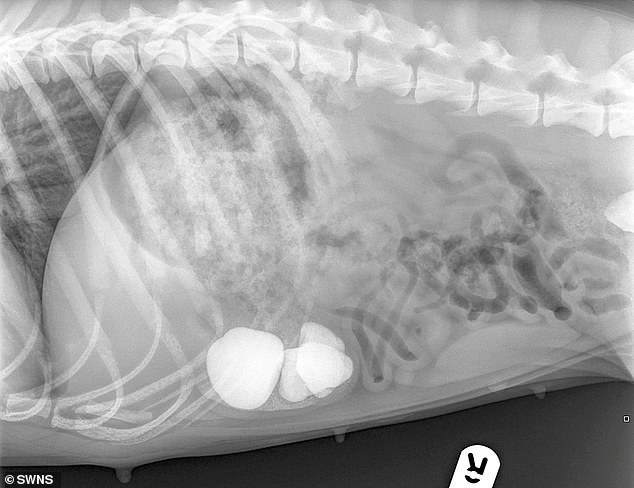 After seeing the X-ray (pictured), vets rushed Ellie-May into surgery to remove the pebbles from her stomach and to make sure there were no further stones lodged in her intestine

Relieved owner Robert Price, 61, said: ‘Ellie-May’s as fit as a fiddle again now and we’re hoping she has learned her lesson.

‘She had swallowed 11 stones in total. I found seven when she vomited up her breakfast and she managed to pass one at the other end.

‘I still took her straight to the vets, though, where they found a further three lodged in her stomach.

‘Thankfully, we can look back on it now without any adverse effects but it could have been very serious, so we’re grateful to Shires Vets for their expert help.’